By DiMarkco Chandler on December 7, 20123 Comments 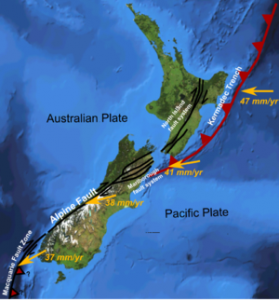 On December 22nd of last year a series of strong earthquakes struck the New Zealand city of Christchurch. It too was on a Friday although it is Saturday presently in that country.

Last years quake rattled buildings, sending goods tumbling from shelves and prompting terrified holiday shoppers to flee into the streets. There was no tsunami alert issued and the city appeared to have been spared major damage.

Again speaking of last year’s tremor, the first 5.8-magnitude quake struck on a Friday afternoon, 16 miles (26 kilometers) north of Christchurch and 2.5 miles (4 kilometers) deep, the U.S. Geological Survey said. Minutes later, a 5.3-magnitude aftershock hit. About an hour after that, the city was shaken by another 5.8-magnitude temblor, the U.S.G.S. said, though New Zealand’s geological agency GNS Science recorded that aftershock as a magnitude-6.0. Both aftershocks were less than 3 miles (5 kilometers) deep.

New Zealand is part of the Pacific Ring of Fire, which is geologically active.

No damage has been reported as the seismic event just occurred 10 minutes ago. As soon as we have word of news from that area in the world we will provide an immediate report.