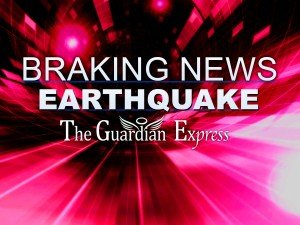 According to the U.S. Geological Survey, the Mag: 6.4 – Depth: 10 km – off the west coast Of Baja California – and the 6.1 magnitude earthquake. 175 km from Rancho Palos Verdes, CA, United States.

Witnesses in Anaheim say they felt a slow smooth whirlpool rolling shake. Another witness in Ocean Beach, San Diego, was quoted as saying “Been through many, this was the longest feeling one, my 2nd story 100 year old apt, the floor swayed and twisted.

Inglewood says “It was crazy it didn’t wake me up but the dog did.

Coronado witnesses say nothing fell off walls but certainly the house shook.

here in San Diego, just felt my couch shaking from that quake a little while ago… very eerie!

Folks in La Jolla say they felt a gentle shake.

Spring Valley witness says it woke her up.

An Anaheim witness told us she was awake for odd reason then started feeling the earthquake. She says it frightened. In her words: “I hope the world doesn’t really end.

There were many many more disturbed by these two quakes.

Earthquake shaking in the eastern United States can travel much farther and cause damage over larger areas than previously thought, but these quakes were south west of that part of the U.S.

There are no reports of damage or lost of life.

While we were yet compiling this report another 5.1 quake hit the southern coast of California.

The Guardian Express will update you as soon as we have more information.