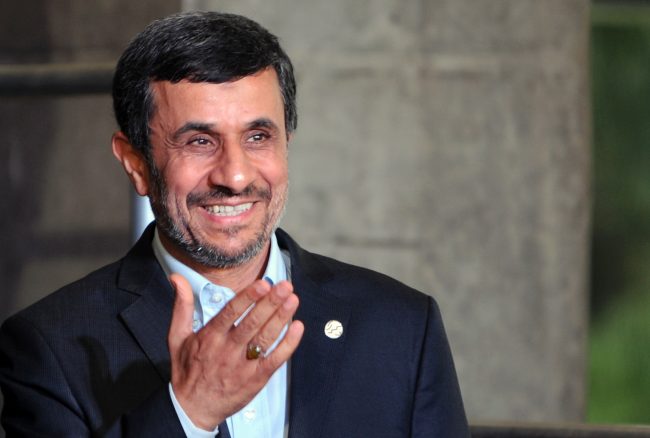 Iranian President Mahmoud Ahmadinejad was arrested and held for seven hours Monday and warned to keep his mouth shut about matters detrimental to the Islamic regime before he was released, according to a source within the Revolutionary Guard’s intelligence unit.

After his visit to Tehran’s 26th international book fair Monday, the source said the head of Ahmadinejad’s security team informed the Iranian president that he had been asked to appear at the supreme leader’s office for an urgent matter.

On the way to the meeting, contact between the security team within the president’s convoy was disconnected while three other cars joined the convoy, instructing the lead car to take a different direction. Ahmadinejad, instead of being taken to the supreme leader’s office, was taken to a secret location in one of the buildings belonging to the Foreign Ministry, which is under the control of the Revolutionary Guards’ intelligence unit.
As soon as Ahmadinejad exited the car, he and his security team were involved in an altercation with Guards’ members in which his team was disarmed and communications equipment confiscated. Ahmadinejad was then forced to enter an office belonging to Hossein Taeb, the head of the Guards’ intelligence, located underneath the building.
As this was happening, the source said, hundreds of other Guards’ members from the intelligence unit sought out Ahmadinejad’s associates throughout Tehran and questioned them on the existence of documents detrimental to the regime.

Ahmadinejad was questioned for hours in a meeting with Taeb; Asghar Hejazi, the head of intelligence at the supreme leader’s office; Mojtaba Khamenei, the supreme leader’s son; and Gholam Hossein Mohseni Ejei, the attorney general. He was warned to back down from his claims against regime officials and given an ultimatum. The source added that Ahmadinejad was released back to his security team at 11:45 p.m. Monday, Tehran time.

Earlier, the regime’s media outlet Baztab reported that with just days remaining for the registration of presidential candidates, Ahmadinejad warned associates that if his hand-picked candidate to succeed him, a close confidant and a top adviser, Esfandiar Rahim Mashaei, was rejected as a candidate, then he would reveal tapes that will show the regime defrauded the voters in the 2009 presidential election.

One tape reportedly quotes officials as telling Ahmadinejad in 2009 that they will announce his total winning tally as 24 million votes where the real number was 16 million. In the same tape, Ahmadinejad insisted that the officials not do that. The Baztab site was immediately taken down by the regime’s security forces and is still offline.

Millions of Iranians took to the streets after the 2009 election results were reported, calling Ahmadinejad’s 62 percent tally of voters a fraud and demanding a free election. Thousands were arrested, with many tortured and executed. Ahmadinejad’s opponents, Mir Hossein Moysavi and Mehdi Karoubi, have been under house arrest ever since.

Under the constitution of the Islamic Republic, the 12-member Guardian Council decides the eligibility of who can run for office in the country, and anyone with any history of opposing the regime is barred from participation. The council is made up of six Islamic faqihs (experts in Islamic law) appointed by the supreme leader and six jurists nominated by the head of the Judiciary (who is himself appointed by the supreme leader), and then approved by the parliament.

Ahmadinejad had previously warned that he would release documents not only on high-ranking Guards officers but also on leading members of parliament and the Justice Department that prove financial fraud.

The source added that it will be interesting to see if Ahmadinejad takes the warning or if he creates more problems with the regime, but one thing is sure: He could end up dead if he does not.

Reza Kahlili, author of the award-winning book “A Time to Betray,” is the primary contributor of this article. You can review this submission in full at the following website: WND

For those interested in Mr. Kahlili’s background; he describes himself as having served in CIA Directorate of Operations, as a spy in the Iranian Revolutionary Guard, counterterrorism expert; currently serves on the Task Force on National and Homeland Security, an advisory board to Congress and the advisory board of the Foundation for Democracy in Iran (FDI). He regularly appears in national and international media as an expert on Iran and counterterrorism in the Middle East.