Androids Dream of Being Electric Humans 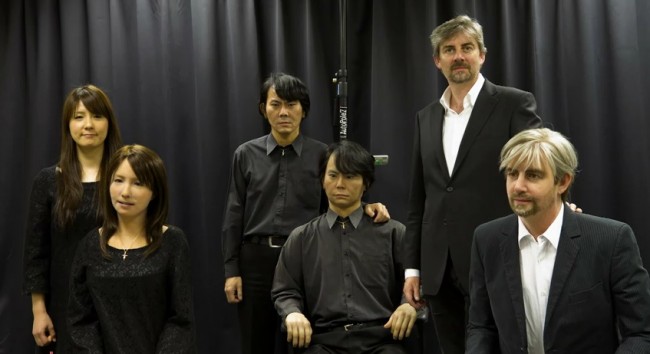 It’s true, androids dream of electric humans, to paraphrase the science fiction author Philip K. Dick. Or, maybe they will one day, just like some human scientists are trying to make their dreams come true of a type of immortality, by downloading their brains into android bodies.

The stuff of science fiction novels is increasingly becoming closer to reality, closer than you might think. By 2045, if not earlier, it could become relatively commonplace to transfer one’s brain into the body of an android.

Is it crazy to want to do something like this? Is it playing God, or perhaps acting like Dr. Frankenstein creating a monster from your own self?

People who are working towards the goal of downloading one’s brain into an android call themselves “transhumanists.” Last weekend, they meet together in a summit called Global Future 2045.

The Global Future 2045 was held in New York in the 1,089-seat Alice Tully Hall in Lincoln Center. More than 230 journalists were in attendance, as well as an Eastern Orthodox archbishop, a Tibetan lama, engineers from Google, and  several scientists influential in setting United States funding priorities.

Dmitry Itskov, a wealthy Russian Internet entrepreneur, a couple of years back had a “spiritual change.” He stopped collecting $20,000 watches and instead launched what he calls a global initiative to create “a new species free from the limits of biology.”

Itskov hopes within 20 years there will be very realistic and life-like androids who will be “artificial carriers” into which human minds can be placed. “It’s a human right. People need to have the right to live, and not to die,” said Itskov, who has plans to raise several hundred million dollars to speed humanity’s metamorphosis into machine-form.

The conference, alone,  cost $3 million, including speaker payments. It attracted the cream of the so-called Singularity movement, including Ray Kurzweil and Peter Diamandis, creator of the X Prize Foundation. The Singularity movement forecasts the emergence of true computer intelligence by mid-century. It is often called a nerd religion.

You will one day have the choice of continuing to live as an avatar or copy of yourself, inside of a robot or android body.

Cool, huh? Or…could the downloading eventually result in the demise of the human race, when the androids turn against the very humans they once were?

Ishiguro says the tough part is getting the little things right, like programming the robots to carry out unconscious movements–the batting of the eyelids, a shy lowering of the chin, and a slight swaying to and fro.

Android busts like that, though, even when the arms and legs don’t move, cost about $100,000 to make and are the result of what Ishiguro calls a “constructive” approach. Slowly but surely, one by one, he’s been adding his own features and mannerisms to his robot, making it more and more realistic.

How do you get your mind inside of the robot, or android?

To inhabit a robot, you also need a way to get your mind, personality and memories into a piece of software. This is exactly what a team of scientists and researchers is working on right now.

These researchers seek to map the cells and molecules of the brain in fine detail. The catch is, doing something like that is a very expensive proposition. They need government money, and possibly that of patrons like Itskov, too.

Mapping the brain is one of the first steps to creating artificial minds.

Impossible? Not to scientists like Theodore Berger, of the University of California, Los Angeles. He has developed technology for storing real memories in silicon.

“Fifteen years ago when we first started talking about building replacement parts for the brain there were many dismissive voices. Now it’s accepted,” said Berger.

First, scientists need to create life-like robotic copies of our bodies in the next 2 to 7 years, which we would then control and interact with the world through. After that gets accomplished, in roughly 5-to-10-year steps, the initiative would work towards transplanting our brains into robot bodies by 2025. By 2035, the next goal would be to do away with the flesh entirely by allowing us to transfer our personality into a robot ‘avatar’.

Scheduled for 2045, the final step in the plan would be to separate ourselves completely from our bodies, and just have our robotic minds controlling holograms to interact with the world.

So, by as soon as 2045, it might be possible that androids will dream of being electric humans, or wonder what it was once like to be fully human, flesh and blood creations. Will they desire to be like we are now; or, will they be glad to have said farewell to the flesh, and hello to the machine?

One Response to "Androids Dream of Being Electric Humans"