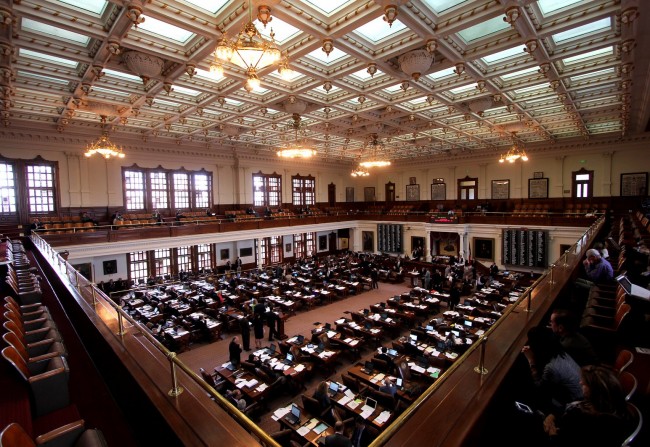 Texans hates women.  The government of the state we should have allowed to secede from the union, has proven over and over again that it hates African-Americans, Hispanics, and the LGBT community.  Now, women will be leaving Texas soon, (or they should be), after the legislature passes a stringent anti-abortion bill.

While protestors marched outside, the Texas House worked through the night to pass a bill which would result in the eventual closure of all abortion clinics, virtually ending all legal abortion in the Lone Star State.

The Senate is holding a special session that will end 11:59 on Tuesday.  The clock may prevent the bill from passing both houses.  Democrats have planned an old-fashioned marathon filibuster to stop the final vote.

Texas is one of several conservative states to attempt the passing of similar legislation.  But the scope of Texas’ is more radical than other red states.  The proposal would ban abortions after the 20th week of pregnancy, require doctors to have admitting privileges at nearby hospitals, limit abortions to surgical centers and stipulate doctors must monitor even non-surgical abortions.  Texas may pass this single most restrictive bill, and would affect the largest number of women in any one state in the nation.

“If this passes, abortion would be virtually banned in the state of Texas, and many women could be forced to resort to dangerous and unsafe measures,” said Cecile Richards, president of Planned Parenthood Action Fund and daughter of the late former Texas governor Ann Richards.

(If you can figure out the following, you’re much smarter than I am.)  Supporters claim that it will raise the standard of health care for women seeking abortions. (?)  Governor, “but I wanna be President,” Rick Perry, promised to sign it.  If I was a woman, I’d be packing my bags and get the ‘heck’ out of town.

The only way to block the measure is for one senator to filibuster until the deadline runs out.  He would have to speak non-stop, remain standing, restrain from bathroom breaks or even lean on anything.

A bill is usually sent to the senate 24 hours after passage in the house.  That means that the filibuster would begin on Tuesday morning, and last for 13 and ½ hours.

The Republicans could attempt to force and earlier vote, and therefore a longer filibuster if all senators were present.  Democratic Senator Leticia Van de Putte was attending a viewing Monday and funeral Tuesday for her late father.  It is unclear if Republicans will attempt to suspend the rule.

Once again women are placed in a lower priority than a biological organism, and every other member of her family.  The pecking order in Texas is Father, unformed fetus, children who have been born, and finally the mother.

No man should make a decision regarding abortion.  They have no knowledge and no relationship to the issue.  Too many backward thinking men assume that abortion is an easy choice for a woman.  Quite to the contrary, and that is why abortion clinics are necessary.  Unlike a regular hospital, they offer psychological counseling before the procedure is performed.  In the State’s scenario, women will receive a lesser quality of health care.

If I was a woman, I’d be leaving Texas, and live somewhere where everyone was treated equally under the law.

4 Responses to "Women are Leaving Texas?"