Adam Lambert in Glee, iHeart and Followed by Glamberts 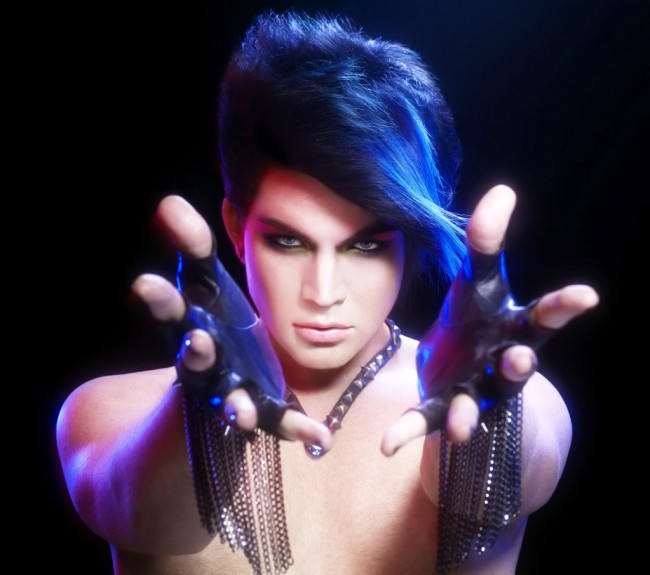 Lady Gaga can keep her little monsters, Demi Lovato can hoard her Lovatics because Adam Lambert has his Glamberts. The death of star Cory Monteith overshadowed the news of Adam Lambert joining the cast of ‘Glee’ for season 5. Gleeks and Glamberts alike are vying for the show to return after the thumbs up from strong and beautiful Lea Michele. In addition to Glee, Lambert is slated to join Queen at the 2013  iHeart Radio music festival at the MGM Grand Garden arena in Las Vegas, Nevada.

In 2009, a heartthrob walked on the set of American Idol. His intense eyes and sultry looks beckoned in fans, his smooth and strong voice brought tears from girls and boys everywhere. Although, Lambert astonishingly finished in second place next to Kris Allen (who?) the singer is an icon in the eyes of millions of fans. Even Simon Cowell had given the crooner a standing ovation for his performance on the show.

It was Lambert’s ‘For Your Entertainment’ that reached number three on the ‘Billboard 200’ chart shortly after ‘Idol’. He reached critical status of fame, being compared to the likes of Gene Simmons and rocker Freddie Mercury. Early last year Lambert released his second album ‘Trespassing’ and it remained number one on the ‘Billboard 200’ chart for weeks to come. Brian May, guitarist from Queen took an open interest in Lambert’s style and the two began collaborating in 2012 and will return to headline in 2013’s  iHeart festival. Glamberts exhale another sigh of happiness at the news.

In a ‘Rolling Stones’ interview weeks after the 2009 conclusion of American Idol, Lambert told the magazine, “I don’t think it should be a surprise for anyone to hear that I’m gay.” His fan base only grew with the revelation, proving that ties binding down the gay community could be broken with a powerful voice. Lambert’s star brightened and he only continued to make waves of impressions in the music industry.

His fan base wanted to show an appreciation level to their favorite singer seen only for the top stars like Justin Bieber and Lady Gaga. The ‘Glambert Project’ was created by dedicated fan AJ who resides in New Zealand. The fanatic fan took to social media to raise the presence of the powerful movement. A few shares became a global movement as millions of individuals gladly joined under the widening Glambert umbrella.

AJ wanted to show the world there was more to Lambert and more to his fans than beautiful music. He was a musician that transcended stereotypes and became a force to be reckoned with. AJ stated during the start of her campaign, “It continues to fascinate me how every Adam concert I go to, everybody gets along and creates these instant friendships, regardless of age,” she continued “I wanted to show to other fans that ‘you are not alone’ as well as show the world that pop culture is positive and needed in society.”

Lambert equally loves his fans and looks forward to connecting with Glamberts and Gleeks alike at the September iHeart concert. Local radio stations are rumored to start giving out tickets to the contest starting next month. Adam Lambert has come a long way. From a daydreaming 10 year old in San Diego to one of the hottest stars in music and television. The premier of Glee is slated for September 26, no current word from the network regarding which episode Lambert will appear on. For now, Glamberts and Gleeks await the premier of star and show.

19 Responses to "Adam Lambert in Glee, iHeart and Followed by Glamberts"