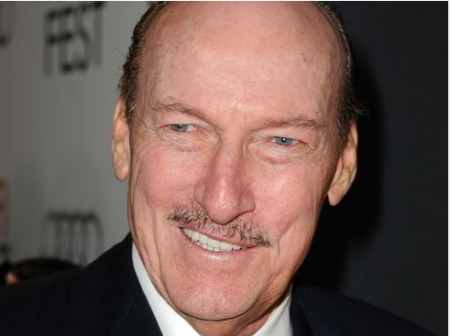 American character actor Ed Lauter whose instantly recognizable face allowed him to work for over fifty years in film and television died from mesothelioma, a rare form of cancer. He was 74. The veteran actor worked in well over 200 films and television projects. His lean and stern features allowed him to play both thugs and cops in his long and very busy career. The actor had recently been in the 2011 film, The Artist and had completed work in several films yet to be released.

The cancer that killed Lauter was a rare form of the disease that is caused by prolonged exposure to asbestos. the actor passed away on Wednesday October 16 according to the actors publicist Mr Edward Lozzi.

Edward Matthew “Ed” Lauter II was born on October 30, 1938. He was a prolific character actor and worked as a stand-up comedian.

Lauter always referred to himself as a “turn” actor. His explanation of the term was that he played characters who, when they entered a story, turned the plot in a different direction. During his long acting career, he played a combination of authority figures, villains, con-men and comical characters. But whatever part he played, Lauter could exude menace easier than almost any other actor. It was, to an extent, his trademark.

Lauter was well known from his portrayal of the vicious prison guard who plays against Burt Reynolds jailed quarterback in the original 1974 Robert Aldrich film The Longest Yard. His character, Captain Kanuer comes to respect Reynolds’ character by the end of the film. But regardless of what film he was in, Ed was instantly recognizable. The character actor worked steadily in film and television and he was working up until a few months prior to his death from mesothelioma.

Over his long career, Lauter worked with the some of the biggest names in Hollywood; Robert Aldrich, Alfred Hitchcock as well as Clint Eastwood, Tom Cruise, Charles Bronson, and George C Scott. Ed worked with Charles Bronson no less than three times. He worked in The White Buffalo, Breakheart Pass and Death Wish 3 all of which were starring vehicles for Bronson.

In the 2011 Berenice Bejo film The Artist, Lauter played a butler. The actor said that his observation of real people that surrounded him as a boy growing up in Long Beach, New York, had given him a lifelong resource of characters to call upon for his work.

The prolific character actor found it very amusing that members of the public could so readily recognise him when he was not working. He also thought it was funny because though he was recognised, a few did not know his name. They would say to the actor that he was “that guy” and then not be able to name the film that they had seen him in.

The actor said in 2010 that his favorite role was that of the prison guard captain in The Longest Yard. In an interview, he told how the director Robert Aldrich explained to the actor that he did not have to audition for the part by reading the script. The director took Lauter to a park where he made him throw a football. Once Aldrich was convinced that Ed could pull off being an quarterback in the film, Lauter would have the job.

The way that Ed convinced Aldrich was that on his first throw of the football, he hit ex NFL receiver Pat Studhill, who did stunts for The Longest Yard, right in his “jersey number”.

Ed Lauter, who was instantly recognizable throughout his long career as a character actor, worked steadily up to his death from mesothelioma.