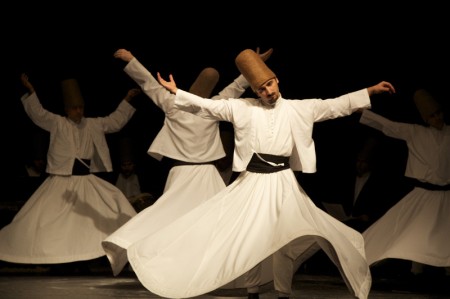 Maulana Jalaluddin Rumi’s whirling dervishes perform their mystical dance to the awe struck audience all over the world; and no matter for an hour or two relieve the audience of the mundane reality of this worldly existence and transport it into the hidden mysteries of the otherworldly realities where the soul takes precedence over the body, and the “union mystica” between the finite soul of an individual and the infinite spirit of Allah is achieved.

According to the Sufi creed it is fana, that is annihilation of the ego which leads to baqa, that is everlasting existence in the holy light(cross reference to the burning bush and Moses). This oneness is achieved through different techniques of various Sufi orders. In Maulana Rumi’s order, this mystical union is achieved through the whirling dance of the dervishes.

To the uninitiated into the lore of sufism, the whirling dervishes signify nothing more than an old art form, some kind of dance movements to appease Allah, but to those who have knowledge of the Sufi lore and ways, the whirling of the dervishes is the path of union with Allah; a way to nurture the bond of love that exists between the creature and the Creator.

Maulana Jalaluddin Rumi (1207-1273) was born in Balkh, which today is located in the modern day Afghanistan. He received his early education at home. His father taught him the Holy Quran, Hadith(the life and precepts of the Prophet Mohammad(PUBH) ), science, math and fiqh(Islamic jurisprudence).

The news that the Mongol hordes under Genghis Khan were fast approaching Balkh made Rumi’s father accompanied by relatives and friends to flee their home town and after meandering through much of the present Middle East settled at Konya, in present day Turkey.

It was in Konya that Rumi came to know and fostered friendship with Shams Tabraiz one of the greatest mystics of his time. It was Shams Tabraiz that unraveled before Rumi the mysteries of sufism. And it was under his influence that Rumi is said to have recited 50,000 rhymed couplets, compiled in the Mathnawi Maulana Rum:

“Come, come whoever you are,

An unbeliever, a fire worshiper, come.

Our covenant is not of desperation.

Even if you have broken your vows a hundred times,

The sect of the whirling dervishes came into being shortly after the death of Rumi in 1273. It was the mystical poetry and teachings of the Maulana that inspired their formation. It takes years of rigorous training before a dervish is ready to perform in front of an audience.

Their white robes and the tall fezzes, their measured gait and their dance movements are full of symbolic significance. During the whirl one hand of the dervish is raised towards the heaven and the other towards the ground. This symbolizes in Sufi terms a unity between the two worlds. One of the mortal body and the other of the immortal soul. The long white robes and the fezzes are significant as they represent the death of the ego, which is a prerequisite for the divine union between Allah and man.

According to (late) Annemarie Schimmel, the famous Orientalist:

“In many ancient civilizations, dance was an offering to the deities…does not the moth circumambulate the candle, dancing, as it were to immolate itself in the end in the flame which is enchanting light and consuming flame, representative of the Divine Beauty and Majesty?”

In conclusion this whirling dance of the dervishes does not only cement the bond of love between God and man but between man and man. It was in recognition of this universal view of Rumi, that his 800 birth anniversary in the year 2007 was declared the year of Maulana Jalaluddin Rumi and the Whirling Dervishes by UNESCO.