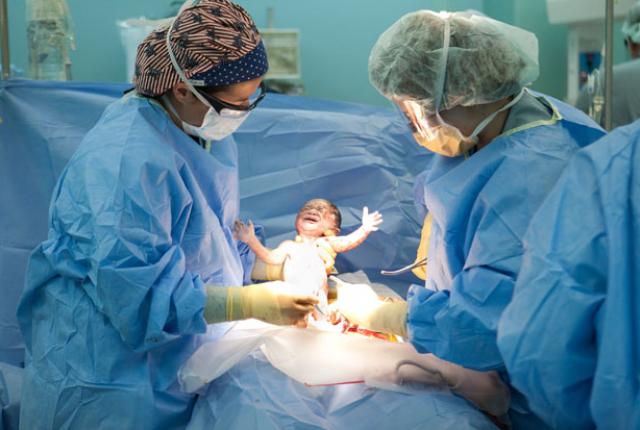 It was Julius Caesar who was “ripp’d untimely from his mother’s womb” thus originating the term, Cesarean section. Now, in modern-day Britain, a child has been forcibly removed from a mother, who was sedated and thus unaware of the procedure.  Quickly deemed “the stuff of nightmares” by human-rights group, this extraordinary story has left Essex social services with a lot of explaining to do. And a mother who has yet to be united with the baby girl who was taken from her body.

In a case which has been described by those representing the mother as “unprecedented,” a court order was obtained, in August 2012, for the Italian mother-to-be, in England on a work placement at the time, to be enforced to give birth “by way of cesarean section.”

The pregnant lady was visiting the UK. She worked in the airline industry and was attending a fortnight’s training course for Ryanair at Stansted Airport, in Essex. It is reported that she suffered from bipolar disorder, and had missed a regular dose of her medication.  She then experienced a panic attack.

The panic attack was brought on by a momentary confusion about her other children’s passports.  She was worried she could not find them. She called the police.

In the scenario that ensued, she was then removed by the police from the airport hotel room she was staying in to a nearby psychiatric hospital and then restrained and sectioned under the terms and conditions of the Mental Health Act. Her mother in Italy was called, and she explained that her daughter was bipolar. Despite this, after five weeks in the hospital, the woman’s baby daughter was removed from her womb, by cesarean section, without her having given her consent.

All that she was told was that she could not have any breakfast. She was then forcibly sedated and taken to another hospital. When she came around, she had no idea what had happened to her. She had been unconscious. The baby was taken away by social services and she never saw her.

Unfortunately, the story just gets worse. The woman, who cannot be named for legal reasons, was then returned to Italy, without her child. She has two other children and is divorced. The other children had been with her mother at the time of the trip to England.

The baby girl is now 15 months old and has spent her life in state care. Her mother came back to the UK in February to plead to be reunited with her. She was told by the Crown Court in Chelmsford, Essex that her daughter would be put up for adoption. The reason given was that there was a chance she would suffer from a relapse.   The mother, who is said to have made a full recovery, has still never seen her baby girl. The judge on this hearing agreed her condition had improved but the ruling still went ahead for adoption.

The Italian High Court has expressed its outrage at this treatment of an Italian citizen but it appears that the British courts have the jurisdiction. Director of the Human Rights Group, Liberty, Shami Chakrabarti, has expressed the sense of shock and dismay felt by many on hearing of this woman’s plight, “At first blush” she said “ this is dystopian science-fiction unworthy of a democracy like ours.” She went on to say, “Forced surgery and separation of mother and child” is “the stuff of nightmares.”

An MP who is trying to bring about more openness and accountability in the family court, will discuss the case in Parliament. John Hemming said he hoped that the report would “shock people out of their complacency” adding that he feels that the family court is full of corrupt practices.  He called it the “worst case of human rights abuse I’ve ever seen” and said the lady in question was not “treated as a human being.”

There has been no comment from anyone at Essex County Council who carried out the forced cesarean section. The judge who gave permission for the procedure has been named as Mr. Justice Mostyn, although no explanation has been forthcoming as to why it could not have been a natural birth.  In a blunt statement, they have merely noted that, “The council does not comment on the circumstances of ongoing individual cases.”

Lawyer for the unnamed mother, Brendan Fleming said he has never heard of anything like this “in 40 years in the job.”  He pledged he would fight “tooth and nail” for the mother to be reunited with her baby.

As Christmas-time draws near, the potent imagery of a mother and a newborn child calls across the world as a symbol of love and hope. In this tragic story where a child was taken forcibly from her mother’s womb in a cesarean section she was oblivious to, love and hope are all she has left to fight with.