Lockheed Martin Contracted to Colonize Mars in Mars One Project 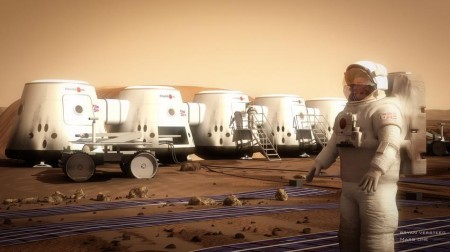 Lockheed Martin has landed a contract to build a lander to colonize Mars as a part of the Mars One Project. The bid proposed by a Dutch company says they have received over 20,000 applications to be one of the first people to not only ever set foot on Mars, but set up a permanent human colony on the red planet. The plan involves sending four people in the year 2025, funded by the Mars One foundation, with absolutely no chance of returning back to Earth once dispatched.

This science fiction inspired plan “Mars One” project is the next step in space travel and exploration. Lockheed Martin will send an unmanned mission seven years prior to the launch of the first humans, in the year 2018, to settle in a robotic lander and a communications satellite that will greet the humans on their arrival.

By the end of 2013, the Dutch company plans on revealing which applicants made it to round 2 of the highly competitive bid to be the first pioneers to colonize the red planet. The application period closed last month.

The venture is also the first privately funded exploration of a planet in human history.

Chief engineer at Lockheed Martin Space Systems Ed Sedivy says that the team at Lockheed Martin is excited to participate in the project, and that a majority of its funding would come from partners and sponsers, not public contributions. Observers say this is worrisome, citing a lack of public oversight for what the company will do once they have arrived on Mars.

A part of this historic mission involves the production of liquid water on the surface of Mars by the Lockheed Martin technology. The “Mars One probe” will have a robotic arm, equipped with a camera, along with the equipment necessary to produce the liquid water needed for human life to thrive on the dusty red plant.

A contest is being held worldwide at universities for those students and teams who can propose a groundbreaking test to carry out on Mars.

This previously unexplored realm of private investment into space exploration is accompanied by Virgin Galactic, the privately run space company headed by billionare tycoon Richard Branson, that says they might just be able to send tourists around the moon in 2043.

“If we can make signicant progress on the challenge of reusable space access then I think that opens up all kinds of opportunities in the future,” Richard Branson said “One of the directions that might open up is high speed point-to-point travel on Earth- so that you could go from London to Singapore in an hour or go from London to Los Angeles in a couple of hours.”

And while private investors are filling in the void, there is no shortage of spectacularly novel ideas for man’s future among the stars.

“This is a great time,” said Jeff Bezos, Amazon founder who heads Blue Origin, a company tasked with developing technologies to allow humans to travel through space.

“There’s a renaissance in space access… it’s so exciting.”

Still, skeptics say that leaving space travel and the “Mars One” project up to private companies could create a conflict of interest, putting profits over the furthering of mankind and the protection of our solar system.