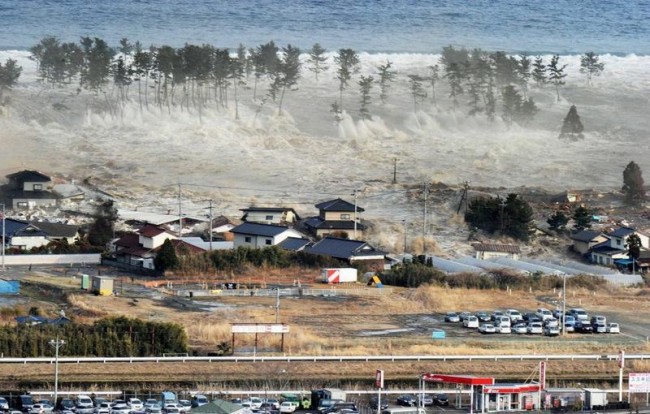 Scientists now believe they have unraveled the mystery behind the devastating Tohoku-Oki earthquake that struck just off the coast of Japan in 2011, culminating in enormous tsunami waves that reached heights of up to 40 meters. Quite incredibly, it seems that a layer of slippery clay was responsible for causing the unprecedented fault slip.

The earthquake was one of the most powerful observed, since record-keeping commenced in the 1900s. The total number of reported fatalities breached 15,000, whilst sizable regions of infrastructure were ravaged; buildings were destroyed, roads were upturned and level 7+ meltdowns were triggered in a number of reactors of the Fukushima power plant.

The findings of three separate papers have been published in the journal Science, using data from the international Japan Trench Fast Drilling Project (JFAST). Emily Brodsky, a geophysicist based at the University of California, Santa Cruz, was one of the co-authors on the three papers and also helped organize the JFAST initiative.

Investigating the boundary between the two tectonic plates (i.e. the fault) can yield invaluable results, regarding its frictional resistance to slip. Since frictional forces generate heat, measuring the temperature of the fault following the aftermath of an earthquake can serve as an indicator of such resistance. Brodsky explains that obtaining these measurements was somewhat difficult to achieve, since the signal is relatively weak and begins to dissipate over time.

This is where the JFAST expedition came in. The project was designed to gain a better insight into the immense fault slip that transpired near the axis of the Japan Trench, during the Tohoku earthquake.

The team used a deep sea drilling vessel, called Chikyu, to successfully perform logging while drilling (LWD) to a depth of around 850 meters below the seabed; using this technique, the crew were able to reach the plate boundary zone that was responsible for the 2011 earthquake. The group then collected geophysical data and a series of seafloor geological cores. As a part of the project, a team drilled across the Tohoku fault and setup a temperature observatory in one of three bore holes.

After analyzing the data, Patrick Fulton, a UC Santa Cruz researcher and one of the study’s co-authors, believes the answer lies in the low resistance to slip on the fault. Primarily focusing on the temperature measurements, Fulton explains the staggering 50 meter displacement, based upon the ubiquitous presence of clay material along the fault zone. It is this “slippery” clay material that may have been responsible for the low friction between the two tectonic plates, during the Tohoku-Oki quake.

The earthquake occurred in a subduction zone – a convergent boundary, where one tectonic plate moves underneath another and progressively sinks into the mantle. During the earthquake, the Pacific plate dove beneath a part of the North American plate. The strains imposed by plate convergence at this subduction zone, and ensuing deformation of the seafloor, kicked up enough water to generate a deadly tsunami, claiming the lives of thousands of Japanese civilians.

In a recent press release, Fulton explained that the fault experienced a massive rupture that went all the way to the seafloor surface. The epicenter of the earthquake was located much deeper than the section of the fault explored during the JFAST drilling expedition. Fulton briefly reflected on this startling discovery:

“The large slip at shallow depths contributed to the tsumani that caused so much damage in Japan. Usually, these earthquakes don’t rupture all the way to the surface”

The earthquake caused a temperature change of between 1,000 and 2,200°F. However, the level of friction that had to be overcome to guarantee the fault slip occurred was expected to be much greater.

When comparing the stresses imposed on the deep and shallow parts of the fault, most of the stress is anticipated to accumulate where the two plates are locked, at the deep portion of the fault. The findings from the JFAST expedition illustrated that the frictional stress at the shallow region was incredibly low during the earthquake. The researchers posit the stress to have been low to begin with; the researches have also suggested a sudden “stress drop,” took place during the violent activity of the magnitude 9 earthquake.

Speaking to the National Geographic, Frederick Chester, a geophysicist at Texas A&M University, corroborates the theory that clay material provided the lubrication necessary to facilitate the fault slip. As the two plates converge, the thick layer of clay that sits atop the Pacific plate is smeared along the plate boundary. The clay traps water, helping to reduce the friction between the two plates.

Meanwhile, according to AFP, Kotaro Ujiie, associate professor at Tsukuba University, who was also an integral part of the JFAST project, recently spoke about the thinness of the clay substance. Approximately 90 percent of the layer in question is comprised of smectite, which has a propensity to become “runny and slippery.”

Ujiie and colleagues investigated the material recovered from the fault zone, concluding it to show very little shear stress. Again, the authors attribute this phenomenon to the lubricating power of the water-swelling clay material.