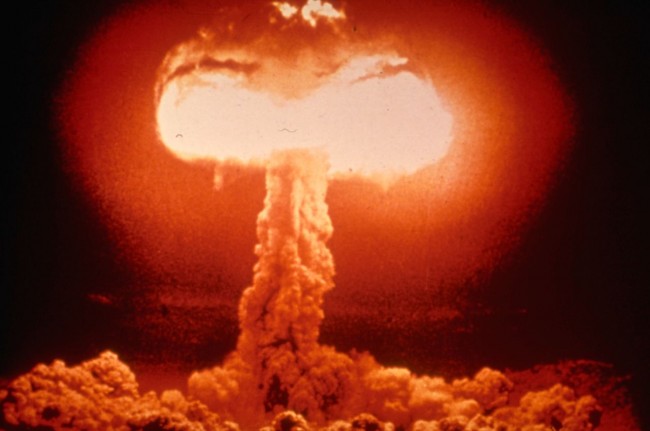 Back in the 1960s, France was involved in atomic bomb tests in the Sahara desert in what was then French-administered Algeria and it turns out radioactive fallout from these tests hit a lot more of Africa, as well as southern Europe.

The first of these atomic bomb tests was that of France’s very first atomic bomb which went by the name “Gerboise Bleue” or in English, Blue Jerboa, named after a rodent living in the desert.

“Gerboise Bleue” was apparently detonated on top of a 105 meter tower near Reganne in Algeria.  Reportedly it was a “pure fission device with a plutonium core and a one-point initiated implosion system.”  The following brief video clip shows the atomic test:

It turns out that at the time, they never really told anyone the reach of the radioactive fallout from the blast and kept it under wraps until this week.  A French newspaper, Le Parisien, has published some declassified documents relating to the atomic testing, including a map showing how, in reality, the fallout spread much further than they said.  In effect, the fallout reached central, eastern and northern Africa and even went so far as to hit southern Spain and also Sicily and Sardinia in southern Italy.  The radioactive fallout from France’s atomic bomb tests hit southern Europe, apparently, within just 13 days of the test.  A link to the map is included at the end of this article.

Le Parisien reported that the French military recognizes that in some areas, the safety standards were widely exceeded.  For instance in Arak, near Tamanrasset, the water was highly contaminated as well as in N’Djamena, the capital of Chad.

The French military are apparently describing the levels as “generally very weak” and they say there is no real threat outside the immediate blast area.

However, Bruno Barillot, a specialist in nuclear testing, told the newspaper that this is what the military will always say.  He stressed that at the time of the testing, standards were far less stringent than they are now, adding that medical advances have since shown that even very low doses of radiation can trigger serious diseases some 10, 20 or even 30 years later.

According to the declassified documents, dangerous levels of iodine-131 and caesium-137 were found in N’Djamena in Chad and Arak in Algeria, although it is apparently impossible to tell the exact levels.

Barillot said that everyone knows these days that these radioactive elements are a direct cause of cancers and cardio-vascular disease.  He stressed that even with the latest document release, the French government has been selectively declassifying documents to hide the real truth in the matter.

According to Fatima Benbraham, a lawyer representing around 30 people who have suffered cancer as a result of the radioactive fallout from atomic tests, nobody has received any compensation as yet, as they don’t actually have proof that these people were in the “very limited zone laid down by the law relating to damages,”   In fact, apparently in total there are around 150,000 people waiting for compensation due to the radioactive fallout.

This isn’t the first incidence showing the lack of knowledge involved when testing atomic weapons.  Three years before the French tests, in 1957, five U.S. air force officers along with a cameraman, were involved in an experiment where they stood directly underneath an atomic explosion at a Nevada test site and waited for the bang.  There was absolutely no forethought as to the radioactive fallout involved and one of the officers even wished that everyone could have been there.  A video of this test is included below:

As more documents become declassified, it will no doubt become clear that radioactive fallout from atomic bomb tests has probably hit far more areas of the world besides France’s contamination of southern Europe and various parts of Africa.

Five men & a cameraman stand directly under an atomic explosion