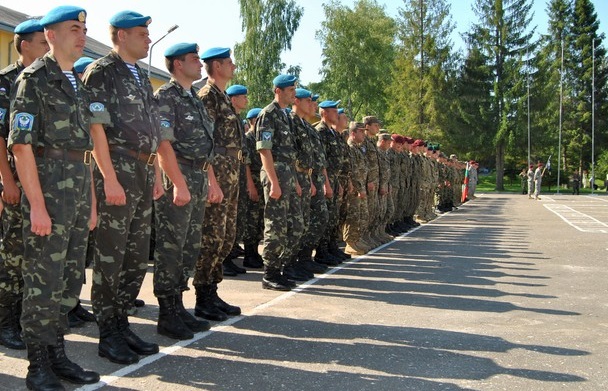 In Ukraine a multinational joint military exercise has been confirmed and is set to begin in July. Twelve nations will send 1,300 troops to Lviv, a northwestern Ukrainian city near the Polish border. The exercise, called Rapid Trident, is the only military exercise the United States will participate in this year, according to U.S. Army spokesperson Col. Steven Warren, since the U.S. cancelled upcoming Atlas Vision bi-lateral U.S.-Russia military exercises in response to Russia’s actions in regard to Crimea. Atlas Vision had been scheduled to begin in the same month in the northeastern Russian city of Chelyabinsk.

Rapid Trident will be led by the U.S., who will send the majority of the participating troops–the number has not been disclosed by the U.S. government. Units from Armenia, Azerbaijan, Bulgaria, Canada, Georgia, Germany, Moldova, Poland, Romania, UK and host Ukraine will also participate.

The U.S. has already sent 12 warplanes and some 300 troops to Poland. The force was dispatched shortly after the Russian invasion of Crimea, and was intended partly as a reassurance to Poland and America’s Baltic allies that the U.S. was willing to protect them from any aggression similar to that seen in Crimea, according to U.S. Vice President Joe Biden, who visited Poland last week. The U.S. also decided to maintain its aircraft carrier, the USS George H.W. Bush, in the Mediterranean Sea “to reassure its allies” after the events in Crimea.

Rapid Trident in an exercise designed to improve interoperability with America’s military partners, such as its NATO partners, Ukraine and others in Europe. Rapid Trident aims to prepare those partner nations for “joint, multinational, integrated” operations “with host-nation support” from the government and civil agencies in those nations, according to the Rapid Trident website. The special Ukraine focus of Rapid Trident is that the exercises support Ukraine’s own military programs, coordination with NATO and commitments Ukraine has made to work with NATO.

Rapid Trident is an exercise directed by U.S. Army Europe (USAREUR), which recently has trained forces in Afghanistan and supported operations in Libya. USAREAR has downsized since the 1980s–it is 80 percent reduced–and its current objective is to train, deploy and support American objectives across its 51-country area of responsibility. A large part of the USAREUR is reassurance to European armies that the U.S. is involved in the operations that are being carried out. This reassurance has contributed to the willingness of the 38 NATO and non-NATO European nations to send troops in joint efforts such as that in Afghanistan, according to the USAREUR website. The USAREUR has seven major garrisons located in three countries: Germany, Italy and Belgium and the Netherlands.

The Rapid Transport exercises will follow recent exercises participated in by the U.S., Romania and Bulgaria, which were staged in the Black Sea and involved the navies of those three countries. Another joint exercise is scheduled to begin this Friday at the Novo Selo training facility in Bulgaria. The Bulgaria-based event is a joint NATO-Ukraine exercise that will be participated in by 12 NATO-aligned countries.

Last year’s Rapid Transport exercises lasted two weeks and included units from 17 NATO countries. The 2013 exercises focused on “airborne and air-mobile infantry operations,” according to the Rapid Trident website. Almost 1000 pieces of weaponry, hundreds of combat vehicles, several military aircraft will be involved in the exercises, according to Rapid Trident’s Facebook page.

This year, Rapid Trident will take place under very different circumstances from last years exercises.  The relative peace in Eastern Europe last year has given way to sudden tensions and the threat of further conflict involving countries with the most powerful armies in the world.

3 Responses to "Rapid Trident, 12-Nation Joint Military Exercise, Will Be Held in Ukraine"