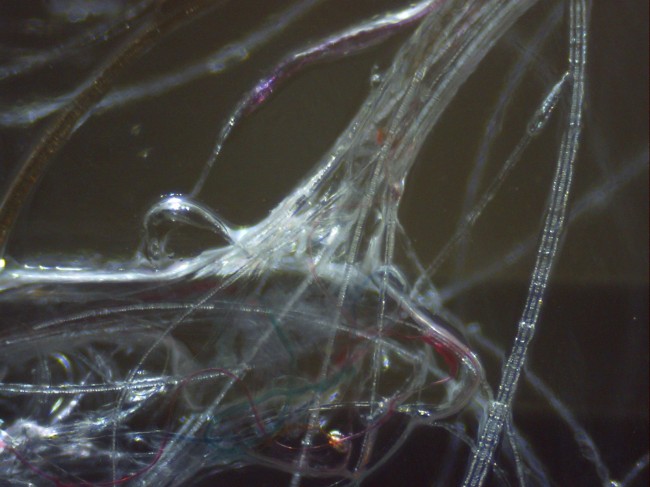 Morgellons disease is a bizarre condition in which sufferers say that, along with a number of other unpleasant symptoms, alien fibers of various colors emerge from their skin. The term Morgellons was coined by a woman named Mary Leitao, whose son contracted a strange lesion on his lip. He would point at the lesion and say “bugs.” Leitao took him to numerous doctors who dismissed the condition with various explanations ranging from eczema to unknown dermatitis. Leitao began researching the symptoms and found an account from the 1600s in which a British physician described “harsh hairs” emerging from the backs of children. Leitao took to the internet with her findings, and shortly afterwards, thousands of people began reporting the same symptoms. 14 thousands families have registered as being infected with Morgellons; a formidable number, and one that would give any health authority pause. There’s one problem, though. The CDC says Morgellons doesn’t exist.

Trying to piece together a complete picture of Morgellons is difficult, because going down any particular road of research almost inevitably leads to what most people would call “crazytown.” There are hundreds, if not thousands, of websites, YouTube videos and blogs dedicated to the “truth” of Morgellons, each with a slightly unique spin on the causes and symptoms of the disease. In the videos and on the websites, there’s talk of vast governmental conspiracies, unknown fibers that “don’t match any fibers in the FBI database,” aliens, chemtrails, Satanism, hexes, nanotechnology, transhumanism, unexplained “glitter” in the environment, “snow fibers,” “chem whips,” Arabic numbers embedded in scabs, the entire mainstream media “being on the payroll of foreign relations;” lots of talk about “connecting the dots,” bugs and worms emerging from the skin and eyes, and a wide assortment of other claims that land most people in the psychiatrist’s office. None of it is particularly coherent.

However, there are certain commonalities that exist among almost all patients. The most typical picture of Morgellons patients goes something like this: otherwise healthy people suddenly wake up one day with unbearable itching, stinging, burning and crawling sensations all over and underneath their skin. They also notice blue, black, red, clear, white and purple fibers emerging from, or popping out of, their bodies. They begin scratching and digging at the lesions, pulling out fibers, “black specks,” bugs, worms, and, sometimes, hexagon-shaped objects from different regions of their bodies. Accompanying these symptoms are a host of additional neurological complaints such as headaches, “brain fog,” exhaustion, loss of coordination, and confusion.

They seek help from their doctors, who can find nothing wrong other than basic skin inflammation. If the patients have collected samples of the fibers and showed their doctors, they are labeled as needing psychological help, because the doctors have coined this the “matchbox sign.” That’s when someone collects bits and pieces of perceived “proof” of their problems in a matchbox or Ziploc bag. The doctors then refer the patients to mental health professionals, and the patients are told the disease is “all in their heads.”

The sufferers seek help on the internet, and soon find websites talking about the conspiracies, chemtrails, et al. With nowhere else to turn, these patients begin to believe in the far-out explanations and demand that the government do something about this condition. Even folk singer Joni Mitchell jumped on the Morgellons bandwagon and is now an activist for those suffering from the disease.

14 thousand people have the bizarre disease they call Morgellons, but the CDC says it doesn’t exist. The CDC conducted a thorough study of Morgellons disease and the findings greatly disappointed the Morgellons community. The fibers, the CDC says, are nothing more than common fibers found in clothing, carpets and other textiles. The study revealed that half of the people claiming to have Morgellons had drugs in their systems, and about a third had pre-existing mental conditions. The medical community decided that Morgellons is a mental disorder called “Delusion of Parasitosis.” This is a well-established mental illness in which people think they are infected with parasites when in fact they are not. It can be treated with anti psychotic drugs, but many Morgellons patients say they’ve had no relief even after trying the psychiatric medications.

The CDC findings were immediately dismissed by the Morgellons community as being part of a wider conspiracy and cover-up. Many Morgellons patients say that their symptoms are related to “chemtrails.” The chemtrail conspiracy holds that the long trails of condensation made by planes in the sky are actually trails of chemical vapor that contain nano-robots which are being used for population control as well as mind control.

However, how these nano robots are connected to the exact symptoms Morgellons patients suffer is never fully explained in any online media, at least not in an easily understandable way. Some people say their symptoms act up whenever the chemtrails are being sprayed while others say they feel they must have inhaled the nano robots that are now spinning these fibers inside of their bodies. Other explanations include: the fibers are fungal in nature; the fibers consist of plant genes; the fibers are a side effect of lyme disease, and numerous other stories which have yet to be proven.

It’s very easy to dismiss all Morgellons patients as just a bunch of mentally ill folks who have been unwittingly drawn into an internet meme, ultimately succumbing to a terrible form of mass hysteria. After all, some of the YouTube videos clearly show people filming utterly natural phenomenon and claiming it is proof of Morgellon fibers in the atmosphere.

One woman, in particular, has made over 500 Morgellons videos on YouTube. She finds various fibers and objects which she then magnifies many times and claims result from the conspiracy. The people who have created these objects, she says, have done so because they haven’t accepted Jesus Christ as their savior. One object she displays was found on the floor of a grocery store bathroom.

Under each video are people commenting who reinforce the idea that these common fibers and objects are, indeed, part and parcel of a governmental conspiracy. This internet reinforcement serves to further spread belief in Morgellons.

Many of the videos show the fibers moving around. An experiment that anyone can do to replicate this is to find any fiber or hair in the environment and place it on the tip of the finger. It is easy to observe air flow moving the fiber. If magnified, the experiment looks identical to the YouTube videos showing “proof” of Morgellons fibers. Many doctors who have treated Morgellons patients say that the sores and lesions found on the patients’ bodies are self-inflicted, and that the fibers are normal fibers that get stuck to the wounds or that the patients put the fibers in the wounds themselves.  In fact, nearly everything about Morgellons is easy to dismiss, but there are a couple of things that remain unexplained.

For one, there are groups of doctors and other medical professionals who believe in Morgellons and insist that it is real. They say they have witnessed fibers embedded under healthy, unbroken skin, and that those fibers don’t look anything like normal hairs or textiles when examined under a microscope. They say they have examined many Morgellons patients, and have compared the fibers they’ve collected against an FBI database of hundreds of known fibers but have been unable to find a match. Some say they have tried to burn the fibers, but have failed.

There is a doctor who says that he’s a geneticist, and that the fibers he tested have been found to contain plant DNA instead of human DNA as would be expected. There is a nurse practitioner who says she’s had success treating patients with high dose antibiotics. There are doctors who are convinced that Morgellons is connected in some way with Lyme disease because some studies have shown that a high percentage of people with Morgellons also have or had the tick-borne illness.

There are thousands of people suffering in complete agony, convinced that Morgellons is real; 14,000 families who have registered to be exact, and perhaps many more. It is indisputable that their pain is definitely genuine. Is it possible that they are all suffering from delusions? It might seem to be the case, especially given some of the bizarre explanations offered online, but the doctors and scientists who are convinced of the legitimacy of Morgellons cast at least some doubt upon the convenient definition of mass hysteria and mental illness.

It is clear that many people who have posted YouTube videos do seem to be struggling with delusions, but is it possible that some Morgellons sufferers are not delusional and really do have an unknown disease? It’s highly improbable and perhaps even impossible that any government conspiracy plays into Morgellons, but what if the small sample group the CDC worked with for the study was not representative of most sufferers? After all, the group consisted of a fraction of a percent of those afflicted with this disease, and no further studies have been done since the CDC released its results.

If all Morgellons patients have delusions of parasitosis, does that mean the doctors and scientists who believe in the disease are also delusional? What can explain away the mysterious fibers they say are embedded inside the healthy, unbroken skin of otherwise normal people? The CDC says the bizarre disease called Morgellons doesn’t exist, but is it at all possible that once all the noise and clutter of the delusional souls are cleared away, something real is left over? If so, the disease should not be considered to be unproven after just one study. Science usually does not settle for one small study. Generally, it takes many studies over multiple years, sets of replicated results, and numerous meta analyses before anything is touted as proven scientific fact. At the very least, the patients who are in real agony should be taken seriously and not dismissed. If someone is, indeed, afflicted with delusions, the proper steps and care should be taken to bring them relief. Finally, more research ought to be undertaken immediately to replicate and confirm the results of the CDC data or to perhaps reveal more concrete answers for those who are afflicted with this painful illness.