Americans Have the Right to Film Police 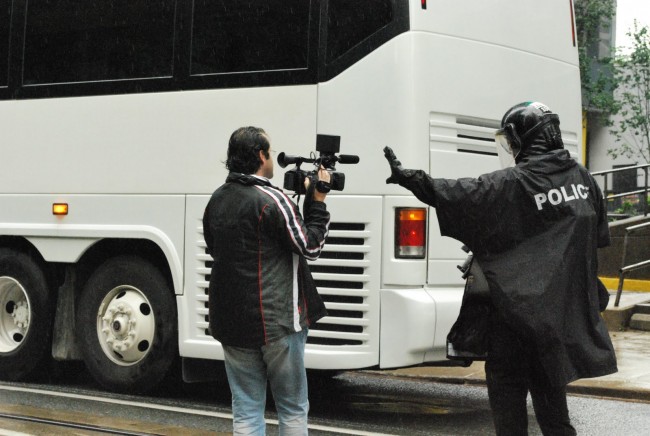 Americans now have the right to film police officers in public. This decision was ruled by the First Circuit Court of Appeals following a long investigation. The appeal came after Carla Gericke was arrested unlawfully.

In March of 2010, Gericke was driving behind her friend, Tyler Hanslin. When the police officer in New Hamshire pulled Hanslin over, Gericke parked in a nearby parking spot. She approached Hanslin’s car and informed the officer that she would record the encounter with her video camera.  Sergeant Joseph Kelly ordered her to return to her car and Gericke complied. She was standing approximately 30 feet from the officer, pointing the camera at Kelly. Since Sergeant Jospeh Kelly did not instruct her to put the camera away, Gericke proceeded to attempt to record the encounter. Unfortunately her camera was not working and as a result, Gericke failed to record the events.

Not long after, a second officer also arrived on the scene. Officer Brandon Montplaisir approached Gericke and demanded that she hand over her video camera. When Gericke refused, Montplaisir arrested her for disobeying a police officer. When she was brought to the station, she was also charged with unlawful interception of oral communication. The charges were later dropped, however Gericke made an appeal to the court.

Carla Gericke claimed that the police had violated her First Amendment right. The First Circuit Court of Appeals agreed and steted that Gericke “was exercising a clearly established First Amendment right when she attempted to film the traffic stop in the absence of an order to stop filming or leave the area.”

It is now clearly established that law enforcement cannot arrest citizens for peacefully recording a police officer who is performing his or her official policing duties in a public space. Unless a police officer tells the person to stop recording and leave the area, there is no violation of wiretapping laws and thus Americans have the right to film police officers in public. The court decision now means that Gericke will be able to pursue a lawsuit against the Weare Police Department for retaliatory prosecution in breach of her constitutionally guaranteed rights.

This is not the first time an incident like this took place. A similar incident occurred in October 2007, when Simon Glik was arrested after recording an arrest where he believed the officers were using excessive force. A police officer approached Glik and inquired if he was taking pictures, Glik informed the officer that he was recording the encounter and the officer proceeded to arrest him.

Wiretapping charges are common as citizens frequently record encounters with law enforcement. Due to widespread popularity of smartphones with video recording capabilities, it is now commonplace to record anything that may be out of the ordinary. The Justice Department believes that all Americans have the right to film police under the First Amendment. Simultaneously, Americans are also protected by both the Fourth and 14th Amendments from having their recordings seized without due process or a warrant.