Quitting Is Not an Option [Video]

Quitting is not an option for those who seek resilience; they need to take steps towards wholeness. Affecting factors include gender, race, prejudice, early childhood experiences, traumatic events, and cultural environment, among others. These shape what a person must deal with in working towards resilience. For those whose paths towards that goal are longer and full of thorns, there is tremendous courage in making the journey.

For many, becoming resilient is about developing skills of mindfulness and self-compassion. Others may not even have this as a vision, but rather than quitting, they push through difficulty with persistence. Common to all experiences, however, is the belief and hope of a better life and the awareness of not being alone. Having human connection and support is essential to being integral.

The resilient who live by the adage “It gets better” are able to see a way out of hopelessness. The It Gets Better project is a powerful movement that was founded in 2010. It was created as a way to help LGBT teens recognize that, although they may face intolerance, there is acceptance and happiness later in life. Since its beginning, thousands of videos, such as the one below, have been posted as an effort to prevent anti-gay bullying that can lead to suicide.

In her book, Live a Flourishing Life (How to Decrease Stress, Build Resilience, and Live the Good Life), Rita Schiano, describes qualities of resilience for those struggling or those who just need a boost. She does this by assisting people to develop and tap into essential skills and attitudes.

Ms. Schiano explains: Being resilient is about “how to survive and flourish through self-understanding and strong interpersonal skills. Resilience is the means by which we are not immobilized by hardship, but rather bounce back from it stronger, determined, empowered, and able to lead gratifying, flourishing lives. Resilience is that quality, that ability that enables some people, who though knocked down by life, come back stronger than before. Rather than allowing crises or failure to drain their resolve, they tap a reservoir of determination that allows them to rise up strong and resolute.”

Through the ages, and at all points in history, those who are resilient manage to persevere despite their difficulties, with their wholeness intact. Ms. Schiano says “it is a matter of courage which, as Aristotle wrote, is the first of human qualities because it guarantees all the others.” It bears repeating that an important commonality that exists among resilient individuals is having physical and emotional support as well as enduring relationships that provide a boost through difficult periods.

Similarly, caring for others can make the difference between doing well and merely getting through the day. This can be as simple as caring for an animal or another person’s needs, or as wide-sweeping as the pursuit of social justice.

If a person wants to really live, quitting is not an option. Rita Schiano mentions three directives that are essential steps in resilience beyond merely surviving. That is, for each person to know what they have, to know who they are, and to know what they are capable of doing. It is important for them to assess and understand their current situations. Then, they can build from that point through coaching and personal development.

In building resilience, an attitude of can-do and optimism are essential. According to Rita Schiano, “When it comes to resilience, attitude is all-important. Having an optimistic view of yourself and confidence in your strengths and abilities creates conditions for success and healthier living. “

Resilient optimists know bad things happen; they experience tragedy just like everyone else. But what separates resilient optimists from their pessimistic brothers and sisters is how they move forward in their thinking and actions relative to those events. They view what went wrong as valuable negative information upon which better steps can be taken to ensure a better outcome in the future.”

Those who have survived deeply anguishing experiences, such as surviving the Holocaust, racism, sexual abuse, or other trauma may find that reaching consistent optimism requires conscious effort. Sometimes a person may not acknowledge a spiritual or particularly religious connection. They may fight for that optimism, but as long as it is present, it can serve as a buoy when things look difficult. Having a sense of humor, and finding ways to de-stress and overcome personal barriers are also part of the development of resilience.

The poet laureate Maya Angelou passed away on Wednesday. She survived overt racism in the Jim Crow era, rape, and incest. In her legendary poem, Still I’ll Rise, she spoke of the downtrodden, walking with their heads held high. Acting “as if” is essential in developing resilience: 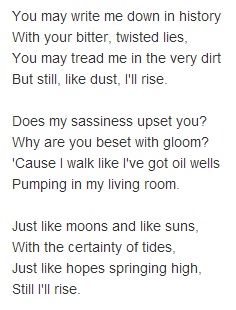 Those who have lived through tremendous hardship, suffering, and tragedy, as Holocaust survivors have, must reach deep within to their well of strength in order to triumph over atrocities committed against them and their families. Viktor Frankl, Holocaust survivor and psychiatrist, in his book Man’s Search for Meaning, sought to make sense of a world replete with evil, and to teach others how to cope. He wrote:

George Scott is a Holocaust survivor in Toronto who writes poetry and speaks publicly about his experiences. Below is a video where he describes life as a miracle about which he never ceases to be amazed. He was interviewed in 2011, along with Shlomit Kriger, editor of Marking Humanity: Stories, Poems, & Essays by Holocaust Survivors.

Following his retirement, he spoke publicly about his experiences as a survivor. In a 1995 Yom HaShoah speech to 500 people, he said, “We need to maintain a twofold perspective. Like Janus, the Roman god of new beginnings, we must look back, as today we look back with pain and sorrow, remembering what happened half a century ago, less than halfway around the globe. But like Janus, we must also look forward. The past we cannot change, but when it comes to the future, we can do more than curse the darkness. Let us get hold of some candles and add to their light, to light the way.”

Quitting is not an option for those seeking resilience. Instead they need to take steps to surround themselves with optimism and hope for the future rather than merely surviving and looking back with bitterness. It is important to balance the difficulties with something positive and to take each day at a time. The experience of attaining resilience is not one-time learning, but rather perennial lessons in not pushing oneself too hard, but rather seeking accepting for the present moment.

George Scott’s interview in 2011 is full of signs of his resilience:

Todrick Hall’s Song It Gets Better encourages listeners to have hope for tomorrow: