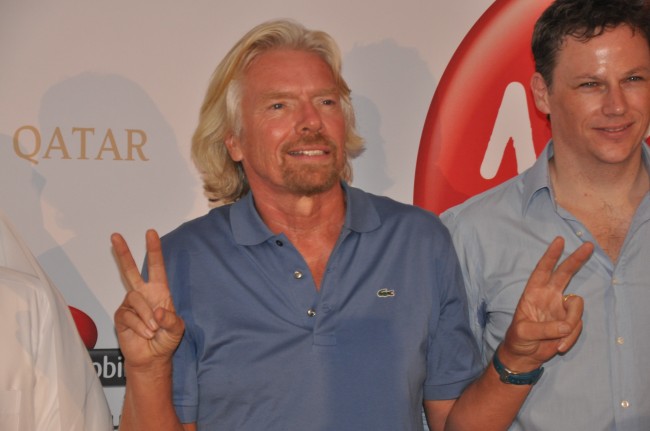 Richard Branson will either be a millionaire or land in jail. That was the prophecy of Branson’s high school principal when Branson was young and motivated to do something with his life. When the prognostication was delivered, neither the principal nor Branson knew that both would happen.

The man who would go on to become the personification of British capitalism, began his march to riches on a less than positive note. Eventually Branson’s empire would grow to include trains, cellular telephone service and airlines. Along Branson’s march to millions — and then billions — were forgettable efforts which included soft drinks, fashion and women’s makeup. His need for constant activity, coupled with a flair for self-promotion, pushed Branson to promote a failed trans-Atlanta hot-air balloon crossing.

The Virgin group today consists of roughly 400 companies registered outside of England and Branson has been fastidious about paying taxes. Now Branson is set to head his company into space with Virgin Galactic, and no one is sure if it will ever leave the earth. Branson’s billions and the success he enjoys can be traced back to a little known incident in the mogul’s early life.

Branson’s attitude can be summed up in the title of his book, “Screw It. Let’s Do It.” While many people know about Branson and his successes, triumph isn’t something that is assured as part of the Virgin label. One of Branson’s earliest attempts — the one that landed him in jail as a youth — is proof of that. But, on the other hand, if it weren’t for a night in the slammer when just a kid, the world might never have heard of Richard Branson.

When the flowers were blooming in 1971 England, Branson was a twenty-year old dropout. The future mogul had an entrepreneurial streak as wide as the English channel. When he had barely turned 16, Branson founded a national magazine named Student. The teen advertised popular records in the magazine and it was an overnight success. As the editor — and sole employee — Branson had been able to land interviews with stars that included Mick Jagger. Despite the rise in popularity, there weren’t any profits. Four years later, Branson would establish a mail-order record store and in 1972, would turn his little shop into a chain of record stores and call the chain Virgin Records. The name “Virgin” was suggested by one of Branson’s early employees because they were virgins in the business world and didn’t know what they didn’t know.

The record selling business was also losing money as a music retailer who sold vinyl records at a significant discount. Eventually, Branson set up a small shop on Oxford Street. The shop was popular with local teenagers and Branson developed a mail-order business which grew. Despite the popularity and growth, Branson’s lack of financial acumen drained the fledgling business. With discount prices, Virgin was a money-pit and Branson was throwing more money into the hole each week.

Branson was in the shop one day watching the customers browse through the inventory when he had an idea. If Branson could figure out a way to sell the records and avoid paying the high 33 percent tax England then collected on domestic sales, he could raise his profit without the need to increase sales. The idea, like great ideas often do, came to him by chance.

Branson was driving a shipment of records to Belgium to sell. When he reached the customs office in Dover, he made a discovery that would change his life. Getting his paperwork stamped, Branson decided to turn around and head home. Along the way, he figured that if he could make several trips like this, Virgin would quickly be debt-free. “It was the perfect plan to get out of financial trouble,” Branson later said.

Branson wasn’t the first businessman in England to stumble across this scheme. Customs had seen the tactic before and it wasn’t long before they were on to him. Investigators from the British customs ministry started pouring over Branson’s export forms. One piece of information caught their attention: Branson had claimed that he exported 30,000 records — in a single Land Rover. The four wheel drive conveyance was roomy, but it wasn’t that spacious.

Branson had been purchasing his product from EMI records, a record label in England. Alerted by an employee with EMI, customs officials intercepted the shipments, marked each album with invisible ink and returned the marked products to the shipping pipeline. Next, customs officials, posing as mail-order clients, started to order the records. Branson was on the verge of getting busted when the records starting showing up in the mailboxes of customs’ officials.

Before customs agents could carry out a planned raid, an anonymous source tipped off the young entrepreneur. The tipster told Branson about the invisible ink. Taking a sun lamp to the store, Branson found that all of the records purchased from EMI had been marked with an “E.”

Looking like characters from a Marx Brothers comedy, Branson and his employees started carting out the marked records and stacking them in a van. Forgetting his father’s instructions to never assume anything, Branson made another big mistake. “We assumed the officers would just visit the South Wharf warehouse,” says Branson. So, thinking the warehouse was the only destination for customs agents, Branson took the records to the Oxford Street shop and placed them in the bins to be purchased.

Customs swarmed over both locations and Branson visited jail. Convinced that only criminals land in jail, Branson had never realized that he had become one. Branson spent the night in jail before his mother showed up the next morning. Putting up her home as bail, Branson was released. Before he was twenty-one, Branson had fulfilled one half of the principal’s prophecy.

Negotiating a settlement with the government in an effort to stay out of prison, Branson managed to go further into debt. Agreeing to pay approximately 60,000 pounds, he knew a failure to cover the cost would land him in jail again. There was a silver lining though.

Branson had always run Virgin Records on a shoestring and without business sense. Bills were paid from petty cash and invoices could be found scattered throughout the small, cluttered shop. The specter of incarceration loomed over Richard Branson and motivated him to learn something about doing business the legal way. Starting to keep strict financial records and managing inventory, Branson put every penny back into the shop with the goal of opening another store. The money then was used to pay off the customs and excise tax.

Eventually, Branson began exporting records the legal way. At the same time, the ground work was being placed that would get Branson his first fortune. Virgin Records grew, expanded and landed names like the Sex Pistols, Culture Club, Phil Collins and Peter Gabriel. Branson eventually sold Virgin Records at a substantial profit in 1992.

“Incentives come in all shapes and sizes,” Richard Branson wrote in his book. “Avoiding prison was the most persuasive incentive I’ve ever had.”