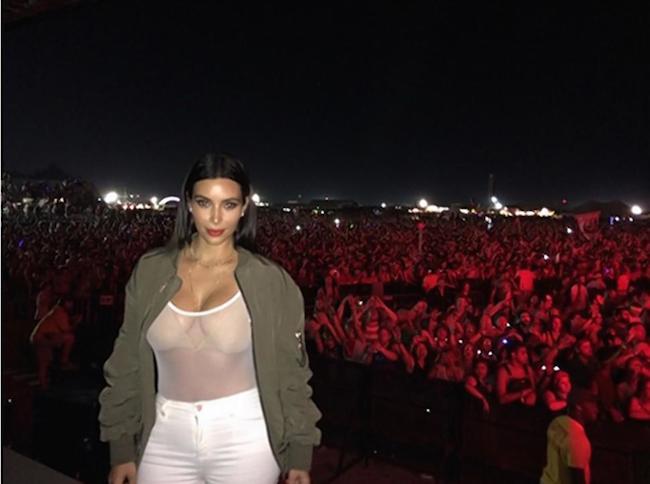 Kim Kardashian supported her husband at Bonnaroo by wearing a revealing see-through top that showed off her one-year post pregnancy body while Kanye West was supposedly booed off the stage late in his act. The performance culminated what was a hectic 24 hours for the celebrity couple. They had jetted in from vacation in Mexico, where Kim had shared some pictures of her sunbathing on Instagram. Then, they scooped up their daughter, and finally headed to Bonnaroo in Manchester, Tennessee. The Bonnaroo Music and Arts Festival is an annual four-day music and entertainment event created and produced by Superfly Presents and AC Entertainment, held on a 700-acre farm in Manchester, Tennessee in the United States of America.

HipHopWired.com said West’s set was filled with ample rants and theatrics in tow, for the crowd of over 100,000 while performing hit song after hit song. At the end of West’s set he reportedly was yelling “I ain’t going after nobody on the radio, I’m going after Shakespeare. I’m going after Walt Disney. I’m going after Howard Hughes and Genghis Khan.” He then compared himself to the likes of such music legends as Jimi Hendrix and John Lennon.

People who are fans of West are used to this kind of self-promotion and narcissism. West often speaks about how he no longer needs chart-toping songs or consistent radio airplay because he is not contending with other living artists, but instead sees himself as a timeless cultural icon. Apparently some of the 100,000 plus fans at Bonnaroo did not take kindly to Kanye comparing himself to such cultural greats and decided to boo him repeatedly until he left the stage. According to tweets from festival goers, the boos were really only effective once West stopped performing songs and began a ten minute foul-language laced rant about his continued success and his hatred of the press.

Six years ago, back in 2008, West appeared six hours late for his headlining performance at Bonnaroo. In the middle of his act he was booed off stage by the fans, which prompted Kanye to aggressively attack the press, Bonnaroo organizers and the crowd for weeks following the show. Organizers responded by not inviting West back to the festival, but as he continued to grow in popularity the committee had to try to invite him back to redeem himself.

Kim Kardashian was there in a sheer top that revealed her body to support her husband Kanye West while he got booed off the stage at Bonnaroo. Her full attire was a see-through top, white jeans, an olive jacket, and high heels that were not exactly perfect for a muddy festival setting, but Kim split her time between watching West perform and snapping photos for her Instagram while hanging in the sound booth.

It’s been a whirlwind romance since the couple got married at Fort Belvedere in Florence, Italy last month, and then had a honeymoon in Ireland after the nuptials before attending West’s stylist’s wedding in Prague, Czech Republic. A source told E! News that Kayne was to perform at Bonnaroo and then he and Kim would fly to New York City for Father’s Day and a small birthday party for North West. Apparently they are throwing North a bigger party in Los Angeles next weekend with Kourtney and Khloé Kardashian attending.

Kim has been very honest about her goals to lose weight following the birth of her daughter last June, which she said it has been ‘the greatest challenge’ of her whole life. It had been reported that Kim had lost about 30lbs after placing herself on the Atkins diet just two months after her pregnancy. She had said that she had her cheat days just like everyone else while doing the Atkins diet that focuses on eating low-carbs, healthy fats and lean proteins.

With Kayne West being booed at Bonnaroo, it was his wife Kim Kardashian’s summer body that was front and center of the show while she was standing in front of the screaming audience posing for a revealing picture. “Oh hey 100,000 people! #Bonnaroo,” she wrote on her Instagram in one of many pictures she took at the annual event where she looks absolutely stunning.