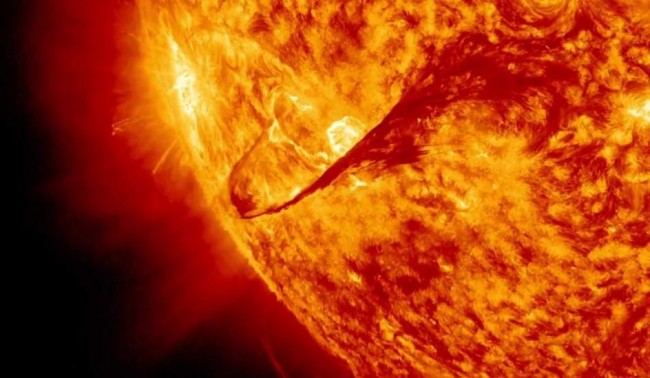 NASA scientists recently revealed that particles from a sun storm on July 23, 2012 almost struck the Earth but the planet was saved by a mere week’s rotation. It was a near miss. Had the solar flare occurred just one week earlier, it would have been directly facing the Earth rather than off to the side.

Although the planet would not have been destroyed, solar flares project a huge mass of highly charged particles, known as coronal mass ejection (CME) that would have changed modern life on the Earth. Instead of striking the Earth, the particles glided next to NASA’s Solar Terrestrial Relations Observatory (STEREO). Probes were able to catch most of the event.

During the solar storm, a plasma cloud rocketed away from the sun as fast as 3,000 kilometers per second, which is more than four times faster than a typical eruption. For the last two years, researchers have been studying the data and have reached the conclusion that it was one of the strongest solar storms ever recorded. They believe it may have even been stronger than the Carrington Event.

The Carrington Event took place on September 1, 1859 and was observed in England by an amateur astrologer for whom the event is named. A large solar flare erupted from the surface of the sun for about five minutes, projecting CME at the Earth. These particles struck the Earth head-on within an hour from the Northern Lights and as far south as Tahiti. The electromagnetic particles caused telephone lines to spark, some of which caught fire, disabling the network.

Had the solar flare been facing Earth in 2012, life on the planet would be vastly different today. A direct impact could have knocked out electricity, GPS, radar and communication networks on a global scale.

Since most urban cities rely on electric pumps to distribute water to homes and businesses, large populations would suddenly have no access to fresh water. As has been seen from other natural disasters such as snowstorms and hurricanes, the bottled water on store shelves would no doubt be bought out within hours of the crisis.

National security would be threatened for years as nations worked to repair multi-ton transformers damaged by the impact. Even if the electricity was out for only ten minutes, the total economic impact of such a disaster has been estimated to exceed $2 trillion.

Scientists do not know when the next sun storm will take place, but they think it is likely that another will occur within this generation’s lifetime. In his paper On the probability of occurrence of extreme space weather events, physicist Pete Riley calculates that there is a 12 percent chance of a solar storm strong enough to disrupt life on Earth within the next ten years. However, no one knows for certain when the next solar storm will occur. Had NASA’s STEREO not recorded much of the 2012 sun storm, no one would have even known its magnitude and how narrowly the Earth avoided being struck by the projected electromagnetic particles.