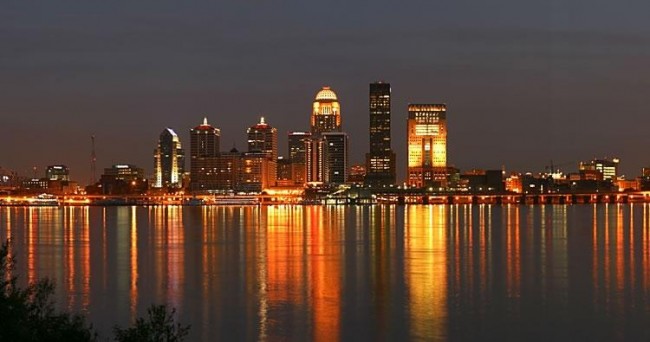 Could a real life threat, based on the movie The Purge actually happen in Louisville, Kentucky this weekend? Residents of the mid-south city are being warned about just that being possible and authorities say they are ready. The Louisville Metro Police have stated they are taking very seriously the threats that have been made and were based on the violent movie. Many terrorizations have made the rounds on various social media outlets about what is supposedly going to happen in the city starting Friday evening.

The Purge film is centered on a 12 hour period which is selected by the government where there are no laws that are enforced and any type of crime can be committed. One trend going on social media declared the so-called Louisville Purge was going to happen on Friday, Aug. 15. LMPD is reacting to the apparent threat by explaining they are watching everything extremely carefully and are taking each threat received as very serious.

It was reported by one Louisville news agency that fliers and posters had been placed all over the city, and on them were announcements about a Purge crime binge that would go into effect on Friday evening starting at 8:30 p.m. and would last until Saturday morning at 6:30 a.m. for all the residents of the Bluegrass state’s largest city. The LMPD sent out a police news release about all the posters and fliers attempting to assure Louisville residents that the police department would be prepared and ready if any type of mass trouble began to occur. 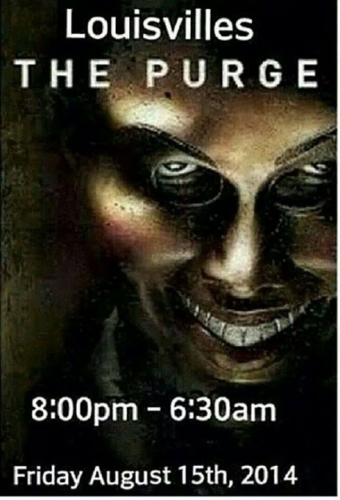 A police spokesperson stated that all threats were taken seriously. Of course everyone hopes that nothing happens, but the Louisville police are prepared in case anything does go awry.

The popularity of the Purge movie, along with its sequel, also joined with global occurrences such as ISIS’s attacking of Iraq, the battles between Israel and Hamas, the conflict happening in Ukraine and even the riots which are now going on near St. Louis in Ferguson, Missouri have all together helped bring extremely violent ideas even more so to public awareness.

The Purge is the first of a fictitious film series where, sometime in the close future, the government permits all crimes to be legal for a 12 hour period. So of course pandemonium strikes as the inmates are allowed to totally take over the asylum. Assault, burglary, rape and murder are all legal, and inhabitants have to go on the defensive for 12 hours to try and stay alive. The first Purge starred Ethan Hawke and Lena Headey and received moderate success when it came out last summer.

Its sequel, Purge: Anarchy, which stars Frank Grillo, opened in theaters in July and got decent reviews.

The ‘Purge’ type threat comes just as the Kentucky State Fair is also opening in the next few days. It is held near Louisville at the Kentucky Exposition Center. With police already being spread thin due to the popular event, this just adds more stress and strain to the threats

Even though the threats could just be just pranks attempting to stir up terror and concern in the city, the Louisville Metropolitan Police Department has made it plain that they are taking these threats extremely seriously and are going to be ready to act if anything does transpire. Such a crime spree threat would be a series of isolated events and in no way would it be a government authorized program as it was portrayed in the two movies. The hypothetical real life ‘Purge’ is supposed to start at sundown on Friday, which will be around 8:30 p.m.

So if a real life situation similar to The Purge was to actually happen in Louisville, Kentucky this weekend, residents have been warned about the dangers and the LMPD states they are ready and prepared.

97 Responses to "Could Real Life ‘Purge’ Threat Happen This Weekend?"