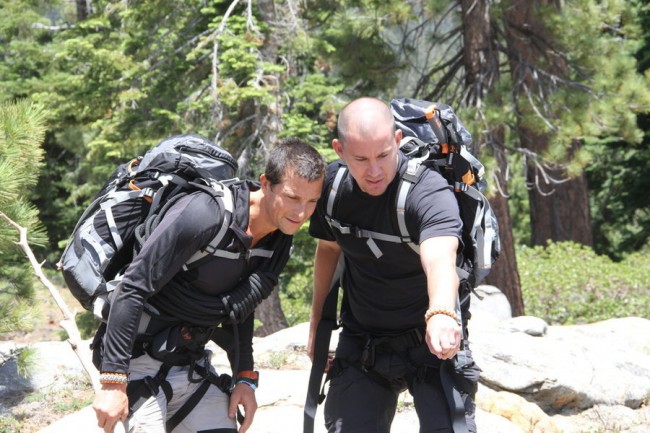 Channing Tatum is the celebrity on this week’s Running Wild With Bear Grylls who adventurer and survivalist, Bear Grylls, will take out into the wilds for an adventure of a lifetime. Bear Grylls and Channing Tatum will be spending 48 hours together, hiking, climbing cliffs, rappelling and living off of the land. They will be in some of America’s most rugged terrain in California’s Yosemite National Park.

Running Wild With Bear Grylls began with Bear talking about Tatum and how his movies, like Magic Mike and 22 Jump Street, have grossed over $2.5 billion dollars. He says that Channing grew up in the Deep South and is a country boy at heart. Bear wrote him some survival tips in a letter that he said “Your life may depend on.” Channing, reading aloud, said “I’m screwed.’

Bear Grylls came to where Channing was, brought there by a helicopter. Tatum was ready to go, with his backpack, and they both got aboard the helicopter. Hovering above a lake, Bear dropped the backpacks into the water. Then, Tatum and Bear both did back-flips into the water.

“I’ve never done it from a helicopter, with blades of death above,” Channing said. “That was epic. That was worth the price of admission.”

They stripped down. Tatum was wearing American flag underwear. Bear asks him how he got his start, and Tatum tells him “stripping.”

They have to travel through a dense pine forest on a 14-miles journey to their extraction point. 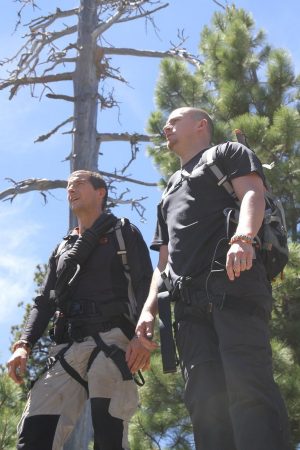 “So, tell me about your dad?” Bear asked.

Tatum tells Bear that his dad used to chase him around with snakes, and even put snakes in his mom’s laundry basket.

There are pine trees all about, with resinous pitch in them. Bear lights some he scrapes off to start a fire. They find a scorpion that Bear says is very poisonous. Bear bites off the stinger and gives Tatum some of the creature to share. “It’s crunchy,” Tatum says.

They then encounter a rattlesnake. Bear asks him if he has ever eaten snake before. Channing says “No.” The rattlesnake can strike over a distance of more than its body length. Bear reassures Channing that “I have a plan.” Then, Running Wild With Bear Grylls went to a commercial break.

Bear pins the head of the rattlesnake down using a forked branch. He asks Tatum to “Go ahead; kill it!” Tatum uses his knife and cuts the snake’s head off.

“So — that happened. It was pretty intense,” Channing says.

Bear shows Tatum how to gut it. Then, he says “We’re going to cut it into onion rings — snake rings,” Grylls said.

Bear points to a steep stony mountain in the distance and says “That’s where we’re going to go.”

Bear asks him if he had to be ambitious in the movie world.

“I think I’m playing the highest stakes make-believe game int he world. When you get to the top of one place, you look past, and there’s always a mountain range beyond that,” Tatum answers Bear.

Bear said to the camera that “For me, he’s a total pleasure, this one.”

They come to an almost sheer cliff. Bear asks Tatum “Have you ever had any climbing experience?”

“Not with something like that, I haven’t,” Tatum answers him.

Bear said “We’re all kind of like grapes. We never know what we’re made of until we’re squeezed.” After more commercials, Bear will instruct Channing Tatum in how to scale the cliff side and find out what Tatum is made of.

“It’s terrifying,” Taum said after the break. “We don’t have anything like this back home.”

“If you start slipping, there’s nothing to stop you from falling to your death,” Tatum said.

“Do you want to lead us to the summit? Take your time,” Grylls said.

Tatum does so, and at the top he says “That was by far the most insane thing I’ve done in my lifetiem.”

“I got tested a lot of times for learning disabilities. It gets really, really discouraging when you’re the last one to finish a test. Now, I attribute it to my creativity. My fight my whole life has been focusing my attention,” Tatum said.

“Well, you’re going to be an inspiration to a lot of people.”

Bear tells him to chew through the ribs of the rattlesnake as they both eat it. “It was a lot bonier than I thought it would be be. I’m going to wash it down with water,” Tatum says.

“That was a big snake. There’s a lot more of it,” is Bear’s response. Channing Tatum doesn’t look too enthusiastic about having seconds, though. 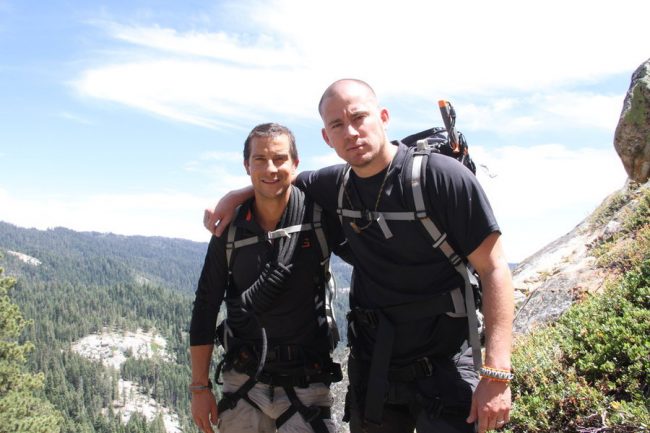 After more commercials, Bear points out storm clouds and tells Tatum they need to change plans about where they were going to camp and instead camp on a little ledge below. Tatum gets lowered down first. “This is basically a straight, sheer drop. If you go over that, this is it.”

“I’m gonna leash myself to Bear so if I roll down the cliff, he’s going with me,” Tatum says to the camera.

They put their feet in their backpacks. “Now, we have improvised sleeping bags. This is pretty nice. Just don’t roll over,” Bear says.

Bear snores and makes t difficult for Tatum to get any sleep. “It was pretty interesting, sleeping on a cliff with Bear Grylls. Now, I can say I did that. I really didn’t get any sleep,” Tatum admits.

Bear tells Channing Tatum “You are committed. We’re going to tandem rappel together. Have you ever rappelled?”

“Only once,” Tatum answers him. Then, the show went to another commercial  break.

When Running Wild With Bear Grylls returned from break, Bear and Channing rappel down the cliff. “Lean back; put your weight into it,” Grylls says.

“Hanging on the face of this ginormous slab of cliff, I felt ‘This is really crazy.'” Tatum says to the camera.

“Looks like we’re about half-way I reckon,” Bear tells Tatum. “This is the bit where we see if the rope reaches the bottom or not.’

“That’s where we get creative,” Grylls answers him. Tatum tells the camera he has never done this kind of thing before.

“Bear just goes to the edge, and that’s, that’s it. One thing that’s really shocking is the small amount of explanation you get just before you put your life in peril,” Channing Tatum tells the camera.

“If you don’t have a photographic memory, I guess that’s it,” Channing continued. “You know when something sort of sounds like it might be a good idea, and then it’s a bad idea? That’s right now,” Tatum admits to the camera. Then, Running Wild With Bear Grylls went to another commercial break.

“Basically, the rope ran out,” Bear says. They make the rope the have reach a ledge. “It reaches — but just,” Grylls says.

“Do you have another pair of underwear down there?” Tatum yells down to Bear.

“He has to commit to that pendulum and release himself down,” Bear says They still have 80 feet more to go. Bear has to break out his Emergency Rope. He says that he usually did not like to do it, but the rope that they had was, by then, pretty beaten up, so Bear got out his Emergency Rope from his backpack.

“It’s a long way down. I’m trying to tie a knot I’ve never tied before. He actually had me put this figure 8 thingie into the rope. I was thinking ‘This is a terrible idea.’ If you start slipping, it’ll be a skating rink all the way to the bottom,” Channing Tatum says.

When Tatum tries it out, though, he says “This is actually awesome.”

“He’s a veritable Stallone,” Bear says. “You’re toughening up. You were already tough, but you’re getting tougher. Now, we just have to make it to our extraction point.” Bear gives off the smoke signal the helicopter pilot is looking for. They take off, with both off them hanging from ropes, dangling from the helicopter.

“What I like about Channing is, yes, he’s talented, but he’s also a nice guy and family man,” Bear Grylls says at the end of the episode.

Next week, Bear will take Tom Arnold out on an adventure of his lifetime. The preview at the end of this episode looks like it should be pretty cool. Tom Arnold may not be as physically fit as someone like Channing Tatum or Zac Efron or to a somewhat lesser extent, Ben Stiller, all who have gone before him; but, he has heart and just might even surprise himself by what he can accomplish.

This episode of Running Wild With Bear Grylls with Channing Tatum was pretty awesome. Bear Grylls pushes the people he takes out with him on these shows to the extreme, but he knows their limits — to an extent, anyway. He knew that he was going out with celebrities as he was filming this series, people who might be physically fit in some cases, but who did not necessarily have the sorts of adventure and survivalist experiences that he has had. Yet, the celebrities, thus far, including Channing Tatum, have dug deep into themselves at times and have demonstrated that the only limits upon themselves are the ones which they put on themselves.