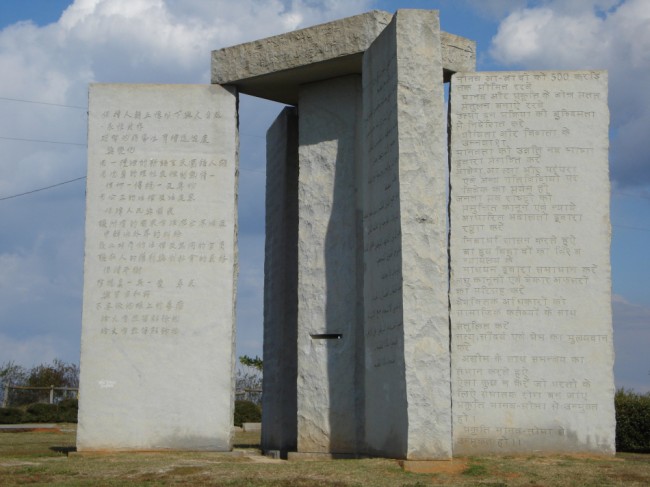 In the Georgia county of Elbert, in the middle of a field is a mysterious and very strong structure known as the Georgia Guidestones and they have recently obtained a brand new addition, the year “2014”. At the top of one of the granite monoliths, an odd slot has been filled with a small cornerstone that has the numbers ’20’ and ’14’ carved on each side.

This event has caused conspiracy theorists to go into overdrive with attempting to figure out why this has occurred. It is, of course, believed that the block of stone has the year “2014” listed on it for a reason and one theory is that it is some sort of message coming from the top-secret society behind the Guidestones that the catastrophes the monoliths allegedly warn of will begin this year. The Georgia Guidestones were built in 1980 and have been considered one of the United States real mysteries. However, while many ignored what the megaliths have carved into them, saying they are nothing but bizarre ramblings of an unknown madman, the Guidestones have appeared to take on a progressively more sinister tone.

All that is really known about “America’s Stonehenge” is that they measure about 20 feet in height and were built because of someone using the fictitious name “R. C. Christian” employed the Elberton Granite Finishing Company to erect the structure. While several additions have been put on the stones, the focal point of their purpose is to present the below message. It is listed on the Guidestones in numerous different languages including English, French and Spanish.

In a nutshell, the Georgia Guidestones basically state to keep the population of Earth under 500,000,000 so to be in everlasting balance with nature. Guide reproduction intelligently and improve fitness and uniformity. Unite humanity with a new language. Be sure to rule passion, tradition, faith and all things with moderated reason. Protect people with impartial laws and fair courts. Let all nations rule on the inside resolving external disagreements in a world court. Avoid minor laws and impractical officials. Balance personal rights with social callings. Be sure to prize love, truth and beauty while looking for agreement with the infinite. Do not be a cancer on Earth. Make sure to leave room for nature. At first glance, people might think these are some kind of instructions for generations down the road. However, the mystery became even more so when the cornerstone was filled in with this year’s date. The notch itself was carved back in 2009 and it was placed on the side that has the message carved out in English.

So many different interpretations of what the small stone means have been going around but of course no one has a clue. It remains as big a mystery as the granite monolith it was placed into. Who knows what it could mean? The Guidestones are frequently vandalized by individuals who strongly are in disagreement with what it has carved in it. Many believe that the words are not just some kind of “simple love one another and have world peace” type of thing but is instead a cold, threatening handbook which is meant to lay out the designs of a sterile, frigid future controlled by eugenics fanatics who want to create some sort of “perfect population” that is ruled by a New World Order.

Strange as this may sound, it was just a few days ago that Democratic party tactician Bob Beckel broadcast that he was allegedly aware of some sort of October “surprise” that had to do with national security. If it was a warning or what, who knows? When one adds wars and the rumors of wars along with the constant threat of the Ebola virus in Africa and the strange EV infection happening right here in the United States, it almost makes one wonder if those creepy Georgia Guidestones really do know something about 2014 that everyone else does not, especially those that trust in science and reason, not tin foil hats and conspiracy theories. “Let these be Guidestones to an Age of Reason,” states a quote from the stones. How is one supposed to understand such a statement? The Guidestones remain in Elbert County, in the middle of a field, just as mysterious and strong as they have been since erected.