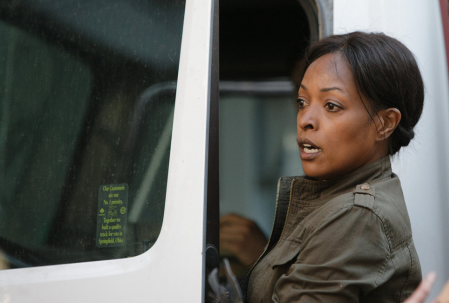 Z Nation finally gets down to what was apparently their target all along, Z Nado. It seems a foregone conclusion that the company who brought Sharknado one and two to SyFy would feel compelled to add a little tornado action in this tongue-in-cheek zombie fest. Before the twisters come in and start slinging zombies all over the place, the team take a time out for some R & R along with a little additional bonding.

Murphy and Doc play cards, Addy and Mack sneak off for a little alone time, Cassandra takes a nap and 10K learns that she is a very light sleeper. Garnett and Warren drink coffee and between knocking zombies off their electric fence talk about Antoine and watch a storm move in. Lightning strikes a transformer and as the walking dead clamber over the small fence, the group leave the house they were holed up in. Citizen Z warns the survivors that a storm is heading their way, but since his misinformation on the helicopter in the previous Z Nation show, the warning lacks credibility.

When the gang head for shelter they go to Castle Point, Warren’s hometown and the last place she saw her fireman husband Antoine. Garnett’s group head to Warren’s old house and once they get in, Murphy begins to unravel. They also find a young couple in the kitchen and the man has a serious concussion. When Warren asks how they got in, it sounds like Antoine may have put them in the house for their own safety.

Before the Z Nado(s) hit in Z Nation 10K and Cassandra go out to get supplies and Warren and Garnett head to the firestation to get medical kits for the wounded man. Addy starts having visions and Murphy looks to be deteriorating at a rapid rate.

Garnett and Warren have a little “sharing and caring” time while fending off a few zombies. They find first aid kits right after getting into the station. Seconds after retrieving the bags, tornados begin to touch down outside and when the two try to escape through the back door, they run into a group of “booted and suited” zombie firemen.

In one of Z Nation’s funniest moments, it turns out that fire helmets can deflect bullets so the duo have to dispatch the walking dead with a hammer and a fire axe. Back at Warren’s basement, Doc is attempting to release pressure from the wounded man’s head and Murphy appears having shaved his head and face. When the “medic” asks for a sharp tool to penetrate the young man’s head, Murphy hands him a portable drill.

Back at the firestation Garnett and Warren check all the now dead zombie firemen checking for Antoine and he is not among the deceased undead. When the two get back to the house a tornado is rapidly approaching and the twister is dropping zombies down that it presumably picked up from the town of Castle Point.

In town, 10K and Cassandra take shelter in a car while another twister heads straight for them. The big zombie dropping tornado hits the house and Warren locks the rest of the team in the basement and sits in her living room to wait for Antoine to return.

By the end of Z Nation, after the Z Nado finally hits and moves on, Warren gets a bit of closure – and reunites with Antoine very briefly – the group all head out. This show will never be quality television, just watching the bloodstains on Doc’s face appear and disappear at the end of the episode of Z Nation proves that. Previews of next week’s episode shows that one of the core team members will be checking out. This could be a bit upsetting as all the characters in this cheesy show have grown on the audience as episodes have gone by. While not trying to sound too callous, hopefully the character who dies will not suddenly reappear like the blood on Doc’s face in this week’s Z Nation episode.