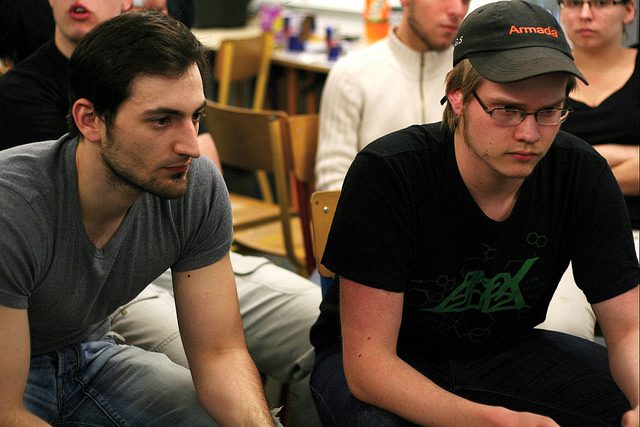 For many, February 1 was Superbowl Sunday, but for fighting game fans it was the day of finals for a plethora of Super Smash Bros. tournaments at Apex 2015. Money was thrown down, upsets were upsetting and Foxes have been gimped, the event was loaded with intense match-ups across multiple streams. As a note, this article will contain the results and thus spoilers for the tournament Apex 2015.

Super Smash Bros. for Wii U is still new, and as a result interesting things are still coming from it. The general idea before Apex 2015 was that Diddy Kong was exceptionally good, that still seems to be correct. ZeRo won with Diddy, while mew2king tied for fifth with him. Dabuz got second mostly with a careful and on-point Rosalina & Luma team. Mr. R got third with Shiek / Captain Falcon and 6WX got forth with Sonic. Sm4sh doubles was won by mew2king and ZeRo with an unstoppable Diddy Kong team. Second place went to a team with exceptional synergy, Ally and Boss playing Villager and Ness.

Smash 64 was won by SuPeRbOoMfAn who played both Pikachu and Captain Falcon. Tacos got second with a ton of characters including Kirby, Pikachu, Captain Falcon and Jigglypuff. Third place went to the most elite Yoshi in the bracket, Wizzrobe. The Z got ninth place, but went on to place second doubles with Tacos. SuPeRbOoMfAn and JamieHR took first.

Brawl was not as big compared to the other smash tournaments, but still had some decent money for top three. Ally took first, Nairo second, MVD third and Salem fourth. The doubles tournament was won by Ally and Nairo, Salem and mew2king got second. Although MJG and FOW (team Villager X Ness) did take fourth place.

In addition to all the official tournaments, were the unofficial events, the biggest of which a challenge that stated if Leffen and Mango met in bracket, they would each place $1,000 dollar on coming out the winner. The God Killer Leffen was on a roll and beat aMSa, mew2king and Mango, ultimately taking with him the extra $1,000. In the end, he lost to PPMD and walked away with third place.

The biggest event of the tournament was Super Smash Bros. Melee with more than 1,000 entrants. Many good matches could be caught from both winners and losers. Hungrybox almost climbed his way out of losers but was taken down by Armada, who lost to PPMD in Grand Finals. Hungrybox and aMSa tied for fifth and KirbyKaze and Shroomed tied for seventh. Ice, Lucky, The Moon and Axe all tied for 13th.

Finally, there was the Salty Suite. Five matches, most of which had money on the line. Eikelmann replaced Kage (health reasons) to fight Bizzaro Flame in a Ganondorf mirror. Westballz fought Colbol in a Flaco vs Fox matchup. Axe fought SilentWolf in the repeat of Pikachu vs Fox from Evo 2014. PC Chris playing Fox and Falco went against the old god Ken, who plays Marth, and Chillindude and Leffen fought for $200 and Fox’s original color. The winners were Bizzaro Flame, Westballz, Axe, PC Chris and Leffen.

As Apex 2015 comes to a close it is amazing looking at all the great matchups that were witnessed. In fact, Smash almost got cancelled from Apex 2015 due to the original venue failing fire codes. Luckily things worked out in the end and the biggest Melee tournament is history belongs to none other than PPMD and his combo creating Falco.

One Response to "Apex 2015 Final Results"