By Chanel van der Woodsen on February 9, 2015No Comment 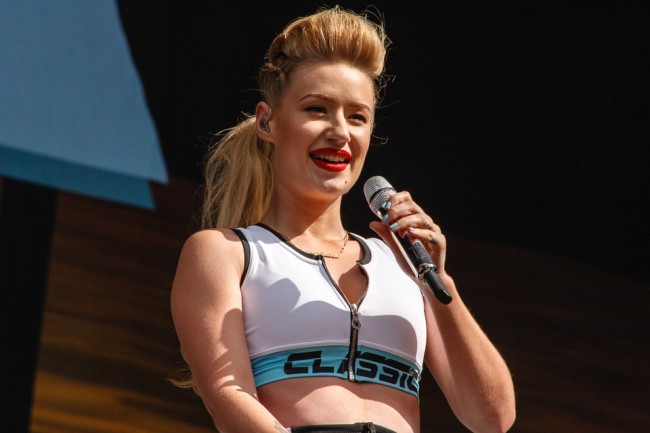 Iggy Azalea has waged war yet again, this time on popular United States pizza chain Papa Johns. She took to Twitter yesterday to express her extreme discontent at an alleged privacy breach on part of one of their delivery drivers, who reportedly gave the rapper’s number to his brother who then began to text her repeatedly asking for recognition.

The 24-year-old says she ordered a cheese pizza from the establishment in question (which she also says is her favorite pizza company) two nights previous to the incident being referred to, but instead of simply receiving her meal as requested she was bombarded with messages and calls from the aforementioned superfan related to the driver. She posted a screenshot on Twitter which detailed two of these messages, in which the individual confesses that the PJ’s employee gave him the rapper’s number, and contains his need for assertion that the number really belongs to Azalea as he is desperate to show her how much he loves her music.

Upon realizing that her personal information had been compromised, the Mullumbimby native called her driver’s supervisor and asked to be given pictures of her driver in order to better identify him as the person who had leaked her personal number, but the supervisor reportedly flat-out refused to hand out this information. It was at this point that Azalea took to social media in order to spread the word on what she felt was the company putting their customer’s privacy second to whatever else seemed like a good idea to them at the time.

The matter, however, has since been said to be in the process of rectification. A spokesperson for Papa Johns gave a statement earlier today to TMZ in which they said that disciplinary actions were being taken towards the driver in question, although they were not willing to go into detail as to what exactly was being done to punish the worker for giving away Azalea’s private phone number. Company honchos are reportedly also doing their best to reach out to Azalea personally in order to deliver the most sincere apology possible for the inconvenience the aforementioned driver had caused. As far as recent reports have stated, they have not yet been able to achieve this goal.

The Papa Johns franchise has gained quite a bit of notoriety over the past few weeks. At the end of January, founder and CEO John Schnatter was publicly scrutinized and blatantly mocked after pictures emerged from this year’s Sundance Film Festival celebrations which showed him apparently eating a piece of rival pizza with a fork. While it was admitted that the slice came from a competitor’s franchise, Schnatter and his representatives have insisted that the food being consumed with cutlery was actually tuna and that the blurry photographs allowed the whole incident to be blown out of proportion.

It remains to be seen whether Iggy Azalea will accept the apology of executives working for the Papa Johns franchise in light of the privacy breach that occurred this past weekend. The rapper has yet to pass comment on the matter.