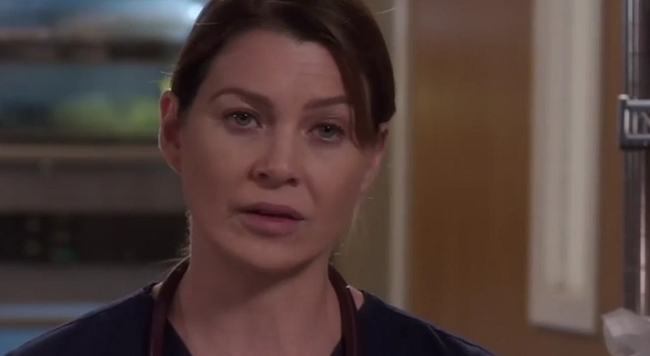 Last week’s episode of Grey’s Anatomy was disappointing for many fans, but Time Stops seems to have picked things up a little. The show seemed to go back to the roots of dealing with medical dramas that mimic some of the stories going on. This week it was all about an accident that reminds Meredith and Amelia of Derek.

It did start with new interns arriving, disappointing many at first. However, there was a point that did come up in the mix. Meredith never called anyone giving them a chance to say goodbye to Derek. She just turned off the machines. It is understandable that Amelia is upset about that. At the same time, it is understandable why Meredith acted how she did. She knew that nobody could save him. It just shows that the two are still struggling a year after his death, and shows that Amelia is taking hold of her feelings.

Alex is there for Meredith when she needs him, showing that he really has become her person on Grey’s Anatomy this year. She admits that her house no longer feels like her house, because it never was. It was an obvious storyline, and leads to Meredith moving back into the home that she inherited from her mother.

All through this episode, it is supposed to be the wedding of Richard and Catherine, but nothing can ever go as planned. A tunnel crashes and doctors are sent everywhere, with victims coming into the hospital like crazy. One victim leads to Owen suggesting suspended animation, which Jackson jokes about being science fiction. This is when someone induces hypothermia to bring the person back to life, and it looks like it is possible in 2016.

Catherine ends up angry with Richard in Time Stops because he would dare to put the Grey’s Anatomy hospital’s reputation at risk with such a tricky procedure that thankfully works out. Once again, they show why the two do not work together.

Jackson is also having relationship problems. Owen encourages him to give April time, even though she seems fine on Grey’s Anatomy, easily taking control at the scene of the tunnel accident. April, Meredith, Amelia and Maggie are trying to get a man out from under his car. Amelia tells the others to leave to save others, and it looks like she is giving up on the man. Instead, she brings him to the hospital with the car, where there is a better chance of saving him.

Owen also makes the decision to resign as chief. That will be disappointing, considering how capable he is in the position, and it brings up the question of who will get the job now. Richard will unlikely go back into the position, but there are options of Alex or even Meredith; not that either probably want such a job. Bailey would be another option for the position, after how she handled the role of chief resident.