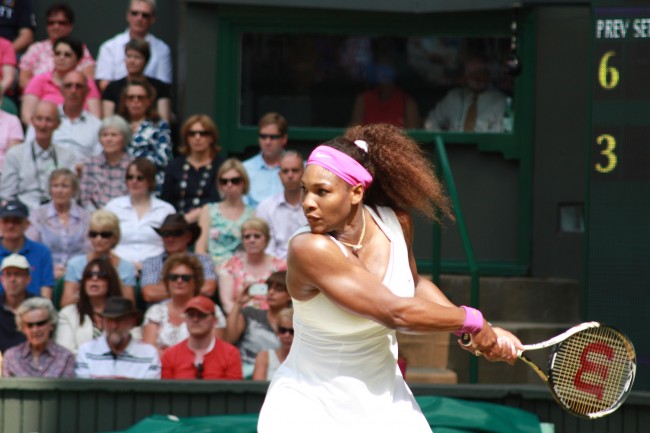 Serena Williams, who suffered a shocking defeat during the U.S. Open semifinals at the hands of the unseeded Roberta Vinci, has sought refuge in fashion after the defeat. The tennis queen unveiled her Spring 2016 collection on Sept. 15, 2015, in New York under the appreciative gaze of rumored boyfriend Drake.

The tennis star acknowledged that she wanted a break after the shocking defeat. Williams was expected to run over the relatively unknown Vinci in her bid to win a calendar-year Grand Slam. This was not to be, as she lost to a player she had routinely beaten several times before the fateful U.S. Open tournament. However, she was in an upbeat mood during New York Fashion week as she presented the Serena Williams HSN Signature Statement Collection. It was clear the athlete did not want to recount bitter memories of her unexpected defeat.

“It wasn’t a loss for me. It was a win and a learning experience,” she told reporters just before the fashion event. “She just happened to bring her best game and there was nothing I could have done about it that day.” Williams is known for her willpower and usually bounces back after such setbacks.

She made it clear that she wanted to take a break and seek refuge in fashion after the defeat. “I love fashion and sometimes it is healthy to take a break from my hectic tennis schedule. I have passion for fashion,” she said in a brief interview with one fashion magazine. Williams, 33, studied fashion at school and began her fashion career as a child. Fashion has always been her refuge during difficult times.

During the show, the tennis ace was dressed in all black with a fringed skirt that showed off her long legs, much to the admiration of both Drake and Vogue editor Anna Wintour. The collection on display featured fringed outfits, suede, leather leggings and cropped jackets. According to USA Today, Williams was inspired by fringed outfits because she wanted to do something that is current and in fashion. Her goal is to have women feel not only “fabulous, but also sexy and liberated.”

Williams, partnership with retailer HSN has helped the star to discover her potential. This has spurred her to experiment with colors as she takes refuge in fashion and music. “But honestly, working on this show has really been a blessing because I’ve just been doing hair and make-up and nails and things you don’t even think about. I worked on music which has been really, really cool,” she said in an interview. She might be taking extra lessons in music due to her relationship with rumored boyfriend, Drake, whose music was played as the models strutted during the fashion show on Sept. 15.

Whether or not she has found new love, the Grand Slam-winning star is certainly not sulking after her monumental defeat on the tennis court. Williams has gracefully accepted the loss, seeking refuge in fashion after the upset. She is expected to continue pushing boundaries not only in the sports field, but also in the fashion industry, where she will engage directly with her adoring fans.