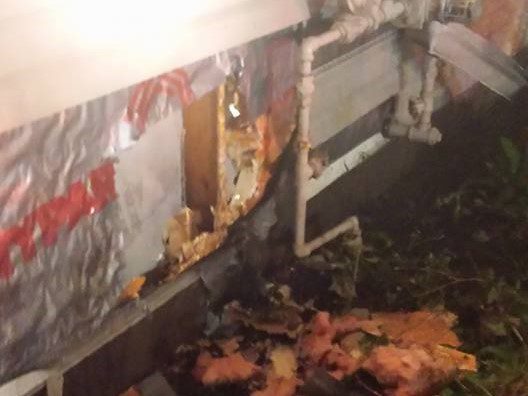 At 10:00 p.m. ET, on Saturday, Aug. 20, 2016, the owner of The Boom House restaurant discovered a fire in the garden mulch. The popular eatery is located on Main Street, in Old Town, Maine.

Eyewitnesses stated that the initial hotspot began from a cigarette butt that was found by the gas line. A trail of embers led The Boom House owner to the fire. He immediately started an evacuation and cut the power. Employees said they could smell smoke but were unable to determine where it was coming from. The cigarette had landed in the mill, therefore, smoke was coming through the ventilation.

The restaurant owner called in the fire and attempted to use a fire extinguisher. However, it had spread into the wall. The surface, where the fire was climbing, was part of a storage shed attached to the restaurant. Employees worked quickly to empty the shed before the firefighters arrived.

The wall and insulation inside the shed were also removed to make sure they had extinguished all the hotspots. The Old Town Fire Department used axes to cut into the outside wall and were able to put out the flames before it reached the wiring.

The firefighters on the scene prepared for anything because it was near the gas line. There were up to 12 men getting geared up while four others cut open the wall. There were no injuries reported from the incident.

The Boom House to re-opened for business an hour later.