The National Enquirer is reporting that Macaulay Culkin nearly overdosed on heroin and has a $6,000-a-month oxycodone habit that will kill him in less than 6 months. “Macaulay Culkin is hooked on drugs and it’s killing him!” one insider told the Enquirer. “He’s been hooked for a year and a half, and his drug of choice is […]

By Jim Donahue: Robert Pattinson is reportedly hiding out at Reese Witherspoon ’s California beach home. Tattles tell US Weekly that a pregnant Reese was more than happy to give up her $7 million Ojai ranch to her Water For Elephants co-star after the world learned of Stewart’s brief affair with married director Rupert Sanders. […]

“The Shining” Prequel in The Works 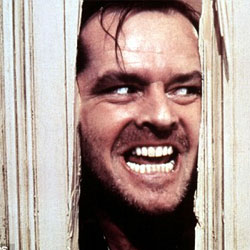 By Jim Donahue Warner Bros. is apparently set to terrify viewers once again by working on a prequel to Stanley Kubrick’s classic horror movie, “The Shining.” The original movie, released in 1980, focused on a writer named Jack Torrance who uproots his family to take an off-season caretaker job at an isolated hotel. Played by […]