The Walking Dead: Evolution is a B*tch 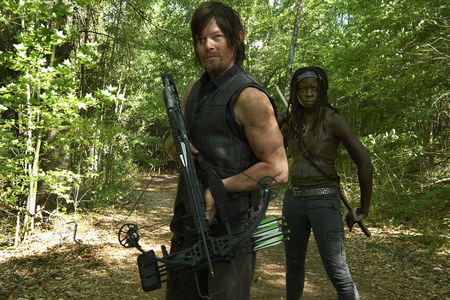 The season premiere of The Walking Dead has given fans their AMC fix. Since Breaking Bad finished, and let’s face it we can only deconstruct that show so many times before it becomes tedious, AMC’s undead series was just what the doctor ordered. The first thing that we learned by the episodes finish was that […]

The Walking Dead 30 Days Without an Accident Premiere (Review)

As The Walking Dead‘s season premiere opens, we see Rick Grimes (Andrew Lincoln) working away in the prison garden (the survivors have put together a community there), while outside the fence that encircles their encampment, the zombies amass, trying to find a way to get in. Lincoln discovers a gun that’s been buried, and removes […]

The Walking Dead Season 4 All They Do is Keep Shuffling

The Walking Dead season 4 starts tonight and fans cannot wait to see where the show is headed next. Walkers are still, mindlessly and resolutely, searching for food and survivors. The amount of survivors fluctuates, rising briefly, then dropping off as the newest members get bitten or eaten. The walkers, all they do is keep […]