Britney’s Been X’d! Spears out of X-Factor Judging Competition

Call it the curse of the X-Factor Judges. First Paula got the boot. The pussycat doll was soon to follow. Now Britney? After weeks of rumors, TMZ reports that Britney Spears will not return to mentor contestants on the upcoming season of Fox’s singing competition ‘The X Factor’. The 31-year-old pop princess was lured on […]

Ellen DeGeneres as Jesus in the “Lesbian Last Supper” 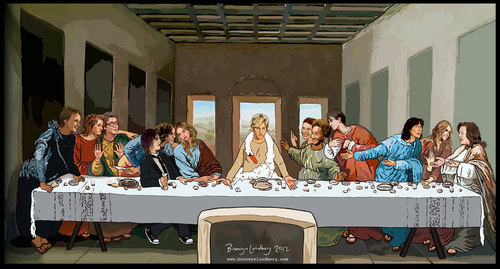 Ellen DeGeneres as Jesus in the “Lesbian Last Supper” West Hollywood artist Bronwyn Lundberg has a new piece she has just unveiled and it comes with much controversy but Lundberg is not surprised by the criticisms nor the praises she has received for her work of art. Art no matter the subject or artist has […]

UPDATE: Why Kim Kardashian and Kanye West Will Make Beautiful Babies Together