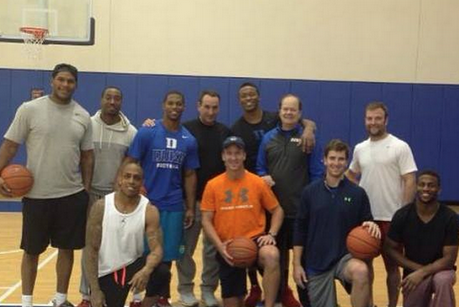 Growing up, Eli and Peyton Manning played a lot of one-on-one basketball together as the sport could be competitive for them despite their five-year age difference. Is it possible that this brotherly competition had anything to do with the younger Manning seeking medical attention for his ankle? The Giants organization says no, but the fact […]

Former Kansas and NBA standout Danny Manning has been hired to coach the Wake Forest Demon Deacons men’s basketball team after two seasons as the head man at Tulsa. He finished his coaching career with the Golden Hurricane 38-29 overall and 13-3 in Conference USA. Manning will replace Jeff Bzdelik, who was dismissed after four […]

Before the anticlimax of Super Bowl XLVIII there was the battle between Tom Brady’s Patriots and Peyton Manning’s Broncos for the AFC Championship. The NFL had the game it wanted, a marquee matchup between the not only two of the best teams in the league, but the two teams with the best rivalry in professional […]