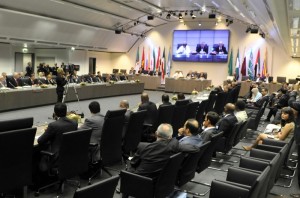 Oil ministers from the Organization of Petroleum Exporting Countries (OPEC) will be meeting this week in Vienna, Austria. It is the 76th Meeting of the Ministerial Monitoring Sub-Committee and the 161st (Ordinary) Meeting of the Conference of Ministers and Delegates. The 12 national group comes together at a time of deep division over production and pricing with Iraq backing Iran’s attempt at limiting production while Saudi Arabia would like to keep a lid on prices, at least until after the November Presidential Elections.

Now what does all of this mean to the average American gas consumer?

For far too long now, the American oil industry has mirrored the price it sells its own crude oil to American oil refineries to the OPEC benchmark price as well as delivery costs equal to the supertanker rates for shipping from the Middle East to the refinery. They have separated their own oil drilling and acquisition divisions from the refineries so that they can sell oil to themselves at the OPEC benchmark price. Obviously, most of us believe that this should not be allowed. However, the big oil companies counter that since the oil embargos of the 1970s, labor has risen to a point where oil has to sell for somewhere between 70 to 80 dollars a barrel just to break even on the labor, and for many years, they lost money on domestic oil drilling or only bought imported oil, thereby increasing our dependence on foreign oil. So now that oil prices are hovering around 100 dollars a barrel, we have resumed domestic oil drilling en masse.

This is why America’s use of imported oil is down.

Let us not forget that our oil reserves are limited, as for a number of years when oil was first discovered and put to practical use, we were the world’s oil producer. And our reserves were never as big as Saudi Arabia’s.

But lately, the price of gasoline has been coming done. There are several reasons for this. One is the price of crude oil is down, because other OPEC countries have ramped up production because of the embargo we placed on Iran. And soon when the European Union embargo goes into effect, crude oil prices may drop again, and in turn our gas prices also. Here’s hoping.

OPEC Ministers Meeting in Vienna added by Amanda on June 13, 2012
View all posts by Amanda →