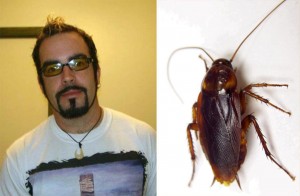 Edward Archbold tragically died after winning a roach-eating contest, on Friday night. An Eating roaches contest leads to the dead of the 32-year-old. Usually eating roaches isn’t deadly, unfortunately Edward didn’t have the same luck, and he died from eating a dozen of those little critters.

Now the Deerfield Beach, Fla. Police are investigating his dead. Edward, who on Facebook went by Edward William. Entered a bizarre eating contest and won first prize by gobbling dozens of live cockroaches and other insects. After winning, Archbold felt sick and started vomiting, he then collapsed in the store and soon afterward was pronounced dead at the hospital, the BBC reports. None of the other 30 contestants became ill and investigators plan to do an autopsy to determine the cause of Eddie Archbold’s death. He won the store’s grand prize, a pet python, with his roach-eating prowess. He also entered a super worm-eating contest earlier in the night.

On Facebook “Ben Siegel Replies” wrote “We all liked him right away,” the staff met Archbold the night of the Midnight Madness sale.  All of us here at “Ben Siegel Reptiles” are sad that we will not get to know Eddie better, for in the short time we knew him, he was very well liked by all.” In other comments beneath the statement, the reptile store wrote that the prize “now belongs to his estate.”

Michael Adams a professor of entomology at the University of California says he has never heard of someone dying from eating roaches before. “Unless the roaches were contaminated with some bacteria or other pathogens, I don’t think that cockroaches would be unsafe to eat,” he tells the AP. “Some people do have allergies to roaches, but there are no toxins in roaches or related insects.”
Meanwhile, Archbold’s friends took to his Facebook page to remember him. Wrote one: “This goes out to one of the most funniest, craziest, and most energetic person I have ever met!!! I will never ever forget u Eddie… I don’t think anyone could!!”

Edward Archbold tragically died after winning a roach-eating contest (Video) added by gricelda7 on October 9, 2012
View all posts by gricelda7 →