“Miley Cyrus” was born November, 23 1992 as “Destiny Hope Cyrus,” she was such a happy baby that family members called her Smiley, a nickname that was eventually amended to Miley. It obviously stuck. “Miley’s” big break came when she was cast as “Hannah Montana”. The show was an immediate hit on the Disney Channel and Cyrus parlayed her television success into a lucrative music career. She released her first album, Hannah Montana on October 24, 2006. Tickets to Miley’s concerts were sold out immediately. Miley reportedly earned $18.2 million in 2007. The sky’s the limit for the Miley Cyrus brand.

1.“Miley’s” godmother is Dolly Parton: “I’m her fairy godmother,” exclaimed Dolly Parton after they performed together at Dollywood in Pigeon Forge, Tenn. Parton has known Miley since she was baby. Her dad, Billy Ray Cyrus, met Parton in the early 1990s when he shot to fame with “Achy Breaky Heart.” He credits Parton for inspiring his own acting career and is thankful that she has been a role model for his daughter. 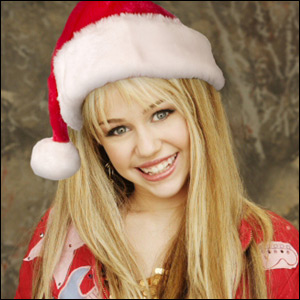 2.“Miley” is a vegetarian, but doesn’t eat anything green: “I hate them all, even though I’m vegetarian. I basically eat pasta every day. How can something taste good that’s green?”

3.“Cyrus” favorite scent is vanilla, but she also likes “Juicy Couture Eau de Parfum:” It is very refreshing and energetic; it suits well for Miley. The notes of the perfume are watermelon and mandarin. It is best suit for young and positive ladies.

4.“Miley’s” Beating Heart Baby by Head Automatica, that she has with her all the time on her blue 3rd generation ipod nano.

5.“Miley” is afraid of spiders.

6.“Miley” bites her nails: Cyrus also has many traits that typical teenagers have. She has a habit of biting her nails – meeting new people makes her anxious.

7.She started riding horses at age 2.

8.“Miley’s” phrases are: “that’s dope” and “cool beans.” Although the phrases do not have a Southern tone, they do demonstrate the vocabulary of a teenager.

9. She is a born-again Christian: “Miley” rises early every morning to read the Bible at 5 a.m.?

10. Miley caused a lot of controversy for posing provocatively for Vanity Fair.

11. From Left To Right: “Miley” was born left-handed, but dad Billy Ray taught her to use her right hand. As a result, she’s joked that if people can’t read her autographs that she signs with her right hand, they should

complain to her father.
12. Miley’s Heart Ailment? Did you know “Miley” suffers from tachycardia, a non-life-threatening heart condition? It causes her resting heart rate to excel more rapidly than normal.

14. Persistence Pays Off: Before earning the title role in “Hannah Montana,” Miley had initially sent in a tape to be considered for the main character’s best friend Lilly. She was originally turned down for both roles until eventually she landed the lead role.

15. In December 2007, the 19-year-old was ranked #17 in the list of Forbes magazine’s top twenty earners under 25 with annual gross of $3.5 million. April of 2008 brought a bit of controversy for Miley, as topless photos of the sprite – covering her chest, but exposing her bare back – taken by legendary photographer Annie Liebowitz appeared in Vanity Fair magazine. Despite the photos, Miley endures as a top teen idol, with a new album that year in July and a big screen adventure Hannah Montana.

Fun Facts about “Miley Cyrus” Miley caused a lot of controversy for posing provocatively for Vanity Fair added by gricelda7 on October 8, 2012
View all posts by gricelda7 →