Romney gave what he labeled his “major foreign policy speech” for what Mr. Obama has already done. 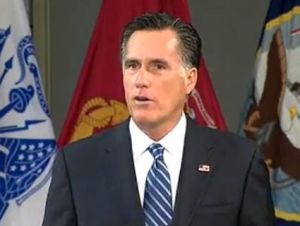 Monday Romney gave what he labeled his “major foreign policy speech.” If you watched it you saw as I did praise for what Mr. Obama has already done.

His “plan” for Syria is exactly what is happening as we speak. His insistence that Iran not develop nuclear weapons is the President’s plan. Maintaining a relationship with Israel is paramount to this administration. Putting aircraft carriers in the Mediterranean has already been done.

Kinda makes me wonder if Romney reads anything other than his redundant speeches. May he’s like Bush, he didn’t like to read either. And once again Romney flip flopped. When the Libyan people were revolting, he advocated American aid. Now he’s against it. He was against the automobile company bail outs, and now he makes the claim it was his idea.

Who is this man who wants to lead our country? Does he have any values, any ideas to qualify him to lead even a boy scout troop?

In his ads that claim “independent studies” found these “facts”, the study was actually done by one of his Bain associates, and Gingrich and Cheney sit on the board.

The only foreign policy Romney would have in place is to get the U.S. involved in another war. If you look in the new dictionary, republican is synonymous with aggressor.

Romney gave what he labeled his “major foreign policy speech” for what Mr. Obama has already done. added by gricelda7 on October 9, 2012
View all posts by gricelda7 →