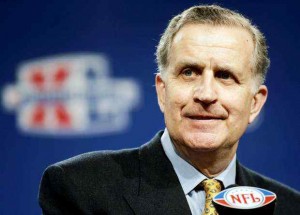 Past NFL Commissioner Paul Tagliabue, assigned by current Commissioner Roger Goodell to field the NFL New Orleans Saints’ players protest of Goodell’s numerous suspensions, has writted that the league will vacate suspensions against several defensive players. Players and fans have inevitably picked sides in this conflict, with most seeming to land on Tagliabue’s interpretation. Few seem to consider that today might well be the culmination of an elaborate game of “Good Cop / Bad Cop.”

You know the game from police movies like L.A. Confidential – if not from real life.

Here we see Guy Pearce in the Tagliabue role -as it were – while Russell Crowe “as” Roger Goodell slaps around the Saints.

Bad Cop Goodell drew a hard line against the New Orleans Saints “bounty” program, in which Saints defenders were encouraged with a 2009-2011 $10,000 bonus for taking out dangerous quarterbacks like Brett Favre. LB Jonathan Vilma is the best-known and most-penalized of the Saints players, who included Will Smith, Anthony Hargove, and Scott Fujita, currently with the Cleveland Browns. Only Fujita was completely cleared; the others had their suspensions, the longest of which was the 10-month suspension given to Vilma, reduced to fines. The coaching staff was hit far harder, with Head Coach Sean Payton suspended for the 2012 season without pay,  defensive coordinator Gregg Williams – the program’s ringleader – suspended indefinitely from the NFL, and two other coaches, general manager Mickey Loomis and assistant head coach Joe Vitt, suspended for the 2012 season’s first eight and six games respectively. The Saints also were stripped of their second round draft picks following both the 2012 and 2013 seasons.

The sports media generally agrees with the analysis of Sports Illustrated’s Michael Rosenberg, that Goodell is the “big loser” in this conflict. In this account, his harsh verdict was “corrected” by Tagliabue, who exposed him as being too strict a disciplinarian. Goodell has earned a controversial reputation among players, many of whom have taken an active dislike to the man who replaced Tagliabue in 2006. None has been as vocal as Pittsburgh Steelers All-Pro linebacker James Harrison, who said of Goodell that “If that man was on fire and I had to piss to put him out, I wouldn’t do it.”

But Goodell remains the Commissioner, the man owners, coaches, and players have to deal with. His is the itchy trigger finger the NFL has to keep its eye on. not Tagliabue’s. And he could have appointed anybody to field the Saints’ complaints – another owner, an ex-player, anyone. That he chose his predecessor ought to signal that a larger game just might be afoot. The message ought to be clear: watch your step.

Tagliabue, in making his statement, took great pains not to sound very critical of his predecessor.

“Having reviewed the testimony very carefully, including documentary evidence that is at the center of the conflict, and having assessed the credibility of the four central witnesses on these matters, I find there is more than enough evidence to support Commissioner Goodell’s findings that Mr. Vilma offered such a bounty (on Brett Favre).” It almost seems planned to defend Goodell against the defamation suit laid by Vilma, which Vilma intends to continue pursuing.

This would make Goodell not so much the Bad Cop, as the Sneaky Cop.