BOOK REVIEW: Nourished By That Which Consumes…will nourish the heart (and libido) 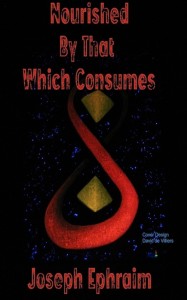 A short romantic thriller that will nourish the heart (and libido) without consuming much of your time.

The story takes place in Singapore and begins with our main character: Yu-Lin. The young girl painstakingly recalls witnessing the deaths of her mother and siblings (and narrowly escaping an untimely death herself) primarily as a result of her father’s life-consuming gambling addiction.

The story vaguely follows Yu-Lin throughout the years as she turns into a gorgeous young woman who uses beauty, brains and guns to seek revenge on the loan-shark/crime-boss who was ultimately responsible for the deaths of her family members.

Along the way she meets some interesting characters…

Jared Cullum – a tall, handsome British man with whom she has a passionate (and descriptively sexually explicit) romantic affair.  The book briefly touches upon Jared’s past, but not enough in my opinion. His background story involving the brutal murders of his parents was one of the more harrowing, yet interesting sub-plots in the book and it should have been expanded upon. Cullum is described as a dangerous man as well as a resourceful ally, but his primary role is somewhat of a full-time lover, part-time ‘sugar-daddy’ to the younger Yu-Lin.

And then there’s Wen-Peng. A smart yet dangerous gang member whose obsessive love for Yu-Lin could either save our heroine or destroy her. Wen-Peng’s internal turmoil concerning his love for a woman versus his desire to rise in power will want to keep you reading to the very end.

This being said, certain areas of the story seem rushed. The backgrounds of various characters could have been delved into more fully to create a more compelling, complete novel – our main character not exempt. At the beginning, Yu-Lin is a child. A few pages later, she is a dangerously beautiful young woman who has somehow climbed her way up to the top echelons of an organized crime clan.  The thing is: How exactly does she get there? What trials and tribulations does she have to go through to reach that spot? The story barely touches on that.

The ending is a little predictable, but if you are looking for a short, romantic (sexually-descriptive) page-turner for the new year – this is your book.

BOOK REVIEW: Nourished By That Which Consumes…will nourish the heart (and libido) added by nmlorde on January 4, 2013
View all posts by nmlorde →