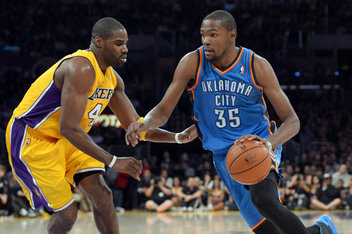 The Oklahoma City Thunder punished and embarrassed the Lakers last night, running them out of their own building. The Thunder are now tied for the NBA’s best record with L.A.’s new powerhouse Clippers with the victory last night.

After his performance Durant said,””Coming in here, it’s tough to win no matter what . We did a great job of just playing together at both ends of the floor all night and not taking those guys lightly. They’ve got two of the best players in the world out, so we just wanted to come out and have a good game.”

The Lakers played without starters Dwight Howard and Pau Gasol yet again. At one point the Thunder had a 27 point second-half lead and Durant had 38 points by the end of the third quarter. At (28-8) the Thunder are right were they and most expected them to be, leading the Western Conference and NBA. What no one counted on was the Clippers being as good as they have been.

Kobe Bryant and the Lakers are some where they have never been, playing little brothers to Lob City in their own building. The Clippers are the talk of the town. Young, talented, hungry, and exciting to watch. The complete opposite of the Lakers, who are old, slow, overhyped and at times boring to watch. I do have a suggestion for the Lakers and their age movement, bring in Lenny Feder (Adam Sandler’s Grown Ups character). Sandler attends the games sits next to Jack, who by the why should be yelling, “You can’t handle the Truth” as the Lakers play.  At least Lenny Feder can hit a shot, and has a nice bank shot.

In all seriousness now, this was a game showcasing the past and the future. I wrote about the “Oldtime” Lakers earlier this week and stil say they need to move parts, take less for what they have and get younger and more athletic. They can not compete with 6’10” Durant and an agile, quick and aggressive Russell Westbrook and the rest of the Thunder roster. For now Kobe can only do so much and is a one man show for the aged Lakers While the Clippers, Thunder, and a handful of other western conference teams are young, athletic and have years ahead of them. Maybe just maybe we will see Jack hand Lenny Feder a Voss water during a timeout. That’s Voss with a V.  By Steve Kish