John McCain Needs to “Stop It”!

The Former “Maverick” is Now Just an Angry Old Man 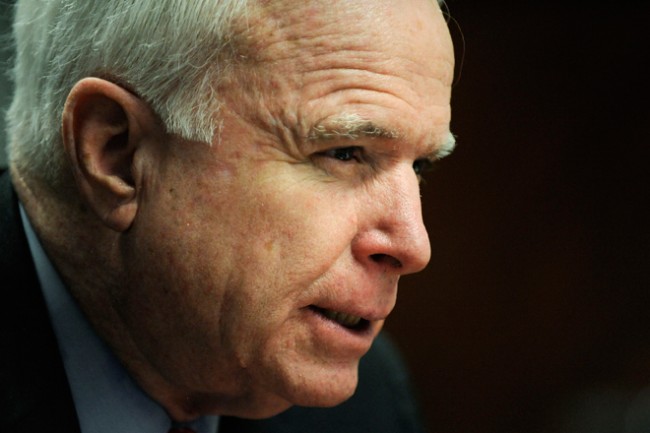 John McCain, (R), Arizona has preferred “town hall meetings” to get his message to the people.  It worked for years until he stopped representing the people.  In addition to being out of touch with his constituents, he is showing that he is too old to hold office any longer.

McCain had a meeting in Phoenix Wednesday evening.  He was often disrupted by people in attendance, and his response was to basically tell them to shut up.

But one woman in attendance had a serious question, and needed some compassionate and intelligent answers.  She didn’t receive them.

Caren Teves’ son Alex wasn’t with her.  That’s because he was murdered in a movie theater in Aurora, Colorado, seven months ago by a man wielding an assault rifle.  He was 24 years old.

She is a self-proclaimed supporter of the 2nd amendment, but asked him about assault rifles and high output magazines.  She said:  “Military-style assault weapons and high-capacity magazines don’t belong on our streets.”

“I can tell you right now you need some straight talk. That assault weapons ban will not pass the Congress of the United States,” McCain shot back.

Ms. Teves was in shock.  She couldn’t believe a Senator who has been in office for over 30 years would respond to a grieving mother in such an uncaring fashion.

I’ve said it before, and I’m proud to say it again, McCain has lost it, he is suffering from senility and for the sake of the country needs to end his role in government.  He can stay in Arizona and reside with the millions of other self-centered, racist, and Intellectually challenged residents of the new “Mississippi of the West”.