Papelbon stands behind his words after the Phillies went 81-81 last season after winning 102 games in 2011. 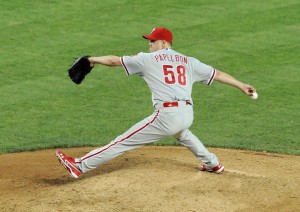 The Phillies massively under achieved last season while having a $171.5 million payroll. They did have their share of injuries(Chase Utley, Roy Halladay, Ryan Howard) and had horrible June(9-19) and July(10-13) records.

What makes these statements by Papelbon seem out of place is his seven years of experience. He has two World Series rings and is a multiple time all-star. Adding to this is the way the Red Sox quit in September 2011. Papelbon was a leader on the Red Sox and didn’t help stop their descent from playoff contention as he blew the save in the last game of the Red Sox historic collapse.

The Red Sox had a nine game lead of the Tampa Bay Rays and blew it by going 7-20 in the month of September. Reports had starting pitchers Jon Lester, Josh Beckett, and John Lackey playing video games, eating fried chicken and drinking beer in the dugout. Did Papelbon show leadership in his seventh year with the Red Sox? There are no reports of this, yet he is calling out other Phillies players about leadership. Talk about hypocrisy.

Papelbon has little room to talk with his history with the Boston Red Sox. He was part of one of the greatest collapses in MLB history. He did little or nothing to stop the slide and put teammates in their places. While Lackey, Lester, and Beckett were having a frat party in the dugout he could have tried to stop them. He could have led by example and told his veteran teammates to do the same, yet no reports say he did.

The Phillies did not meet expectations last year, that is clear. Their 81-81 record was far below what was expected. Yet lack of leadership was unlikely the problem. Injuries and chemistry were more likely the reason for the poor season. Missing three of their biggest names in Halladay, Howard and Utley definitely took its toll on the team. Not only did they miss them in the lineup and in the field, when they did come back it took them some time to get back into the swing of things.

Phillies coach Charlie Manuel seemed to back Papelbon’s statements by saying, “(Papelbon) came over here, we had just won 102 games. He thought we were going to hit homers. He thought we were going to pitch shutouts and be in close games. He might have been a little bit disappointed in what he saw because we had injuries and did not play well. That’s what he was talking about.”

Maybe this season Papelbon will see the Phillies leadership flex its muscles. Then again maybe it wasn’t the leadership and it was just injuries and juggling lineups that doomed the 2012 Phillies. By Steve Kish @SteveKGuardian