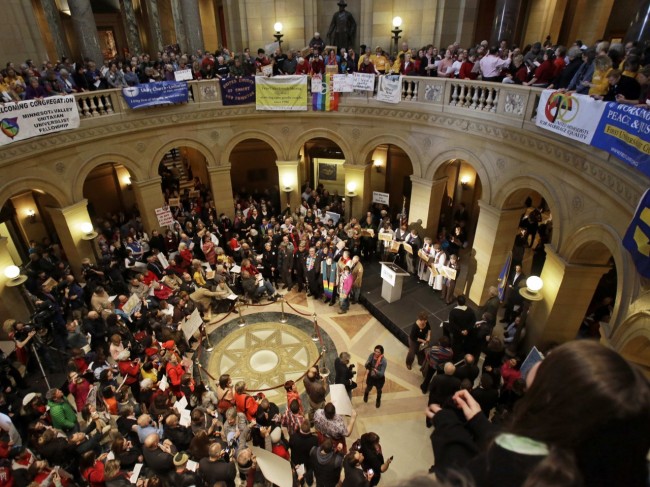 This group includes advisors to George W. Bush, four former governors, and two members of Congress.  This brief is in direct opposition to Speaker of the House John Boehner, and emphasizes the war within the GOP.  My wife asked me, “Why did they retain Boehner as the Speaker?”  I explained that because the House is controlled by Republicans, the position would remain in Republican hands.  I also told her I didn’t see any true “leaders” on the right side of the aisle, and Boehner became the default choice.

The document will be submitted to the Supreme Court before March 26th when it is scheduled to hear arguments to strike down California’s Proposition 8, which outlaws gay marriage.  The following day the Court will hear arguments from the Obama administration that the “Defense of Marriage Act” is unconstitutional because it ignores the Constitutional provision of “equal protection under the law.”

As of Monday night, 75 prominent Republicans have signed the brief.  Some were speaking out for the first time, and some have changed their position.

Among them are Meg Whitman, who supported Proposition 8 when she ran for California governor; Representatives Ileana Ros-Lehtinen of Florida and Richard Hanna of New York; Stephen J. Hadley, a Bush national security adviser; Carlos Gutierrez, a commerce secretary to Mr. Bush; James B. Comey, a top Bush Justice Department official; David A. Stockman, President Ronald Reagan’s first budget director; and Deborah Pryce, a former member of the House Republican leadership from Ohio who is retired from Congress.

Ms. Pryce said Monday: “Like a lot of the country, my views have evolved on this from the first day I set foot in Congress. I think it’s just the right thing, and I think it’s on solid legal footing, too.”

Jon M. Huntsman Jr., former governor of Utah, said in his 2012 presidential bid that he favored civil unions, but not same-sex marriage.  In a recent article titled “Marriage Equality Is a Conservative Cause” Jon displayed his change of attitude, and also created a divisive issue for the 2016 general election.

“The ground on this is obviously changing, but it is changing more rapidly than people think,” said John Feehery, a Republican strategist and former House leadership aide who did not sign the brief. “I think that Republicans in the future are going to be a little bit more careful about focusing on these issues that tend to divide the party.”