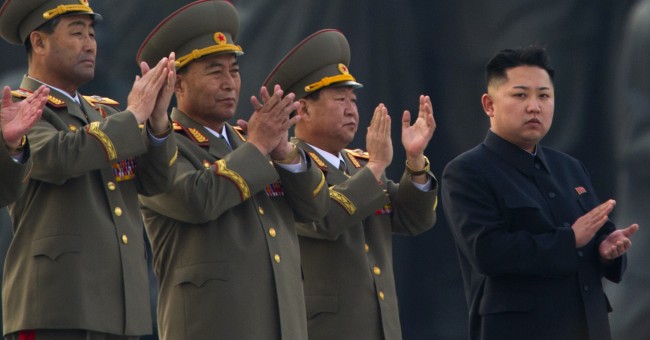 Call it “saber rattling”, fear of isolation, or just plain stupidity, Kim Jong Un is threatening a major conflict between North Korea, and its declared enemies South Korea and the United States.

“The Korean Armistice Agreement is to be scrapped completely just from today,” said a spokesman for the North Korean military — the Korean People’s Army Supreme Command — according to Rodong Sinmun, the official newspaper of North Korea’s ruling Workers’ Party.  Subsequently, there was report of a failure to answer a “hot line” phone between North and South Korea, installed in 2004.

This cancellation of an agreement that has lasted for 60 years is in retaliation to Thursday’s unanimous agreement by the United Nation’s Security Council to increase sanctions against  Pyongyang for a forbidden test of a nuclear device.

“The collective sanction is precisely a declaration of war and an act of war against the DPRK,” said the newspaper, using the initials of North Korea’s formal name, the Democratic People’s Republic of Korea.

These declarations came as the United States and South Korea are combining in military drills called “Joint Resolve”.  The exercises are a continuation of operations that began March 1st called “Foal Eagle”.  They are scheduled to last two months, and an estimated 3,000 U.S. soldiers are involved.

North Korea also has called the annual training exercises “an open declaration of a war.”

“Under the cloak of the UNSC, the U.S. seeks to realize its aggressive purpose against the DPRK by threatening its right to existence as well as its sovereignty,” the newspaper continued. “What is graver is the fact that the U.S. cooked up the resolution on sanction timing to coincide with the ‘Key Resolve’ and ‘Foal Eagle’ joint military exercises.”

The U.N. Command notified North Korea of the impending exercises on February 21st.  There is no connection between them and the current situation as insinuated by North Korea.

In remarks delivered Monday at the Asia Society in New York, national security adviser Tom Donilon said, “The United States will not accept North Korea as a nuclear state; nor will we stand by while it seeks to develop a nuclear-armed missile that can target the United States.”

He added, “The international community has made clear that there will be consequences for North Korea’s flagrant violation of its international obligations.”

He said that Park Geun-hye, South Korea’s first female president, has accepted President Obama’s invitation to the White House in May.

Donilon attended Park’s inauguration in Seoul. “When we met, I conveyed to President Park President Obama’s unwavering commitment to the defense of the Republic of Korea,” he said.

The United States will continue to support the United Nations’ efforts to increase sanctions until they withdraw their threat to become a nuclear weapons nation.  North Korea has threatened preemptive nuclear strikes against the United States and South Korea.  Experts doubt they have the ability to make a small enough nuclear warhead to be transported by a long range missile.  However, they do have weapons grade material to make other nuclear devises.

Donilon believes much of the rhetoric is an effort to gain international recognition and aid for its millions of starving people.

No one is denying the danger of having a young man with a “child-like” mind possessing weapons of mass destruction.