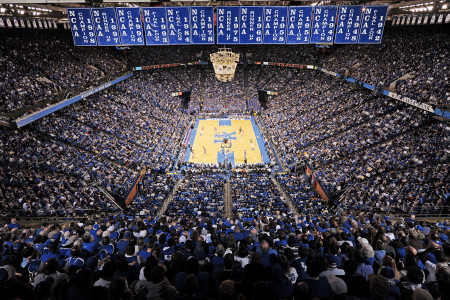 One Week to Go for NCAA Hopefuls

Saturday’s results in NCAA men’s basketball once again created more questions about who will be invited to “March Madness”.

Number one Gonzaga, number 3 Duke, and number 6 Miami will be there as they rolled over their opponents yesterday.

Kansas State lost earlier in the day, so a victory against a struggling Baylor team would give the Kansas Jayhawks the outright championship in the Big 12.  But the result was a share of the title.

Poor Jayhawks defense and outstanding shooting by Baylor produced a loss in Waco.

Number 11 Florida made the trip to Rupp arena to play number 25, Kentucky.  The Gators looked ready to hand a final blow to the Wildcats’ postseason hopes after a 19-5 run provided a 57-50 lead with 7½ minutes remaining. Kentucky responded by scoring the final 11 points of the game, boosting the reigning national champion’s NCAA prospects.  Final score 61-57.

“They swam like heck,” said Kentucky coach John Calipari, who used terms such as “sink or swim” and “do or die” to describe his team’s chances on Friday. “In the last seven minutes, when it was in doubt, they swam like heck. When you’re going to drown, you want to die, don’t swim. If you want to live, the life raft is over there, you’ve got to swim to it.

“As a matter of fact, it’s kind of breezing away from you, so you’re going to have to swim real hard, and they did.”

Number 17, Syracuse went to Washington to play the Georgetown Hoyas.  Because the Orangemen are leaving the conference, this would be the last regular season game between the two basketball powerhouses.

“It’s special because of the Big East, as we have known it, is ending,” coach John Thompson III said. “Georgetown won the first one, and now Georgetown’s won the last. So that means a lot.”

Despite his team’s victory and its share of the regular-season title, Thompson stressed that the Hoyas (24-5, 14-4), who started league play 0-2, were far from satisfied.

The game between Oregon, no. 19, and Utah in Salt Lake produced another upset.  The Utes have been the “doormat” in the Pac 12 for the last two seasons, often the victim of a blowout.  Last night they controlled the game and defeated the Ducks 72-62.

Utah held the lead for the entire game.  The Utes held a 31-28 edge on the boards and a 34-21 advantage on points in the paint.

“We didn’t play with the energy, the purpose, the focus that we needed,” Oregon coach Dana Altman said. “In a game like this, every possession counts and we didn’t get to the ball quick enough.”

“Our defensive strategy starts when we shoot it,” Utah coach Larry Krystkowiak said. “We’re not going to give up transition baskets. Those are the really easy ones. Often times, we send three people back.”

One week from today all 65 teams will be revealed.