TEA Party has no resemblance to Republican Party 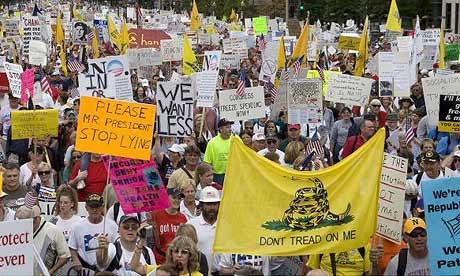 They claim to be an “activist” branch.  They call it a “movement”.  They pretend it just steamrolled, although the money trail leads to big business.  They claim that their political affiliation is the GOP.

It’s time to face the truth. The TEA Party is a separate political entity.  It has no resemblance to the Republican Party I have watched for over 45 years.  They are not a party of ideas.  They are regressive and reject progress in any form.

The money behind the TEA Party has one goal, to control every action of the GOP and pay for one of their own to reside in the White House.  They recruit in a fashion they hope will make them appear concerned for the welfare of the people.

The CPAC, which concluded last weekend, invited many members of the TEA Party.  (Why they were at a GOP function I have yet to understand.)  They proudly debuted a video that was described as a “fake movie trailer that looked vaguely familiar exactly like The Hunger Games (mixed with some 1984 and The Matrix for good measure).”

The film attempted to display the peril that will befall “patriotic citizens” if there is not a major change in entitlements very soon.

“Fifteen years ago, freedom died,” a Woman Who Is Not Jennifer Lawrence informs us. With the new Development Party in power, there is just one Orwellian message on the airways: “When WE provide for every need, then you are fully Developed.”

This is the crap they are spewing.  The working class pay taxes, and they pay their fair share.  They should expect that some of that tax money be returned to them in a form that affects them personally.

It’s not entitlements that are too expensive, it’s government that is too expensive.  Waste, fraud, and “special” entitlements only for upper government employees such as our Congressmen and Senators, are the reason we are in debt.  (We could save a lot of money if they were on the same social security and Medicare plans as those they work for.)

I didn’t vote to put our country into two wars that bankrupted the nation.  I didn’t turn my head as the banking industry committed grand larceny.  I didn’t vote for them to be bailed out when the failure they had themselves created threatened to put an end to the careers of their CEO’s and boards of directors.  I don’t even remember the public being asked about any of these things.  And, why not?  They were supposed to represent us.  They were not supposed to give away our tax dollars.

It continues.  Both Democrats and Republicans ignore the billions of dollars wasted in foreign aid.  Where is the “domestic aid”?

But, thanks to the TEA Party, who deflect us from the real issues with emotional tirades, no politician, no government official talks about the real waste of taxpayer’s dollars.

In Nevada, we have a measure on our ballots that says “none of the above”.  Republicans are attempting to have it removed.  I hope that doesn’t happen, because when I vote in 2014, that’s going to be my choice.