Virginia City Transformed Back in Time to Honor Fred Dutton

Birthday Bash for a Man Loved by Many

This weekend marked the 65th birthday of Fred Dutton, benefits consultant and proprietor of the Victorian and western wear costume shop in Virginia City, Fred’s Closet.  Dutton’s birthday was a three-day event in Virginia City, Nevada, that attracted more than 150 guests from all over the country; although the party unofficially began one day earlier with revelers celebrating with Dutton for four days.

Partygoers began their adventure by stopping by Fred’s Closet to be outfitted for the events in 19th century Victoria and western wear.  Dutton himself meticulously dressed some guests, while his assistant Nancy, her daughter Carla (who flew up just for the event from Fairfield, TX) and friends Marilyn, Modesto, CA, Clair, Reno, NV, and even Dutton’s girlfriend, Lynell,  from Chicago, IL, helped others find just the right look for the events.

Guests were treated to drinks in front of the shop as they gathered on the front porch of the rustic converted home on C Street in the quaint old mining town in the heart of the historic Comstock.  New friendships were already beginning to form; little did anybody realize that was precisely what Dutton had in mind.

Event attendees would have a chance to check into their hotel then meet at the Red Dog Saloon, a local favorite for the best pizza you have ever eaten, drinks, and a chance to socialize.

Friday night’s biggest event was live music and dancing to Steve and Christi Carrasco; Dutton had flown them in from Fort Worth, Texas.  The band was exceptional and played everything from rock n’ roll favorites to country and western.

On Saturday, party guests were on their own to explore Virginia City until 2 p.m. when they arrived at the Bucket of Blood saloon to enjoy the music of the legendary band, David John and the Comstock Cowboys.  The music was lively and fun; the crowd was engaged particularly when the group interacted in such songs as the birthday song to Dutton; “The Yellow Rose of Texas”, dedicated to Nancy, Dutton’s assistant; and “This is Where the Cowboy Rides Away”, the last song of the evening, where celebrators locked arms, waved, swayed, and sang along.

Saturday night culminated in a dinner at Piper’s Opera House with dinner catered by Bonanza Café, where they make everything from scratch daily.  Hosted drinks were provided by Bill and Tami’s Corner Bar, downstairs from Piper’s.  Guests danced the night away to the live band, Lady and the Tramp.

The weekend concluded with another opportunity for invitees to hear David John and the Comstock Cowboys perform at the Bucket of Blood.

Dutton had arranged for his guests to receive special rates at several of Virginia City’s hotels.  Much of the town’s newest hotel, Silverland Hotel, was booked due to the Dutton Birthday Bash.  Cobb Mansion Bed and Breakfast, an elegantly restored Victorian mansion hosted several guests.  The Arts Center, once the town’s hospital, was booked to capacity for the party.

When guests checked into their rooms, they were treated to a party bag filled with necessities such as bottled water, snacks, drink coupons to local businesses, and a wristband to get into the events.

The events and dinner were energetic, fun, and felt exactly the way a celebration should feel.  Guests were always smiling, engaged, and there was never a lull between activities or events.  I have been to Virginia City at times when there was nothing to do or it seemed as if this dusty little town needed to have someone breathe some life into it; this weekend was not one of those times.

Invitees were dressed in period clothing from either Fred’s Closet, or their own personal collections; the town looked as if it were transformed back to the 1800s.  Walking the wooden sidewalks from one saloon to the next felt charming and exhilarating.  I must

admit I was caught up in the excitement of the costumes when I was stopped by a tourist asking if they could take my picture.

As I began to interview guests about why they would travel so far and spend so much money to come to a small town for a birthday celebration, a picture started to emerge about the enigmatic guest who had invited me to his party.

James Gill, photographer, was one of the first people I interviewed; he started a theme that lasted throughout the entire weekend.  “We’re friends,” he stated, “He is one of the most generous and genuine men ever.”  Simple enough, I thought.

Steve and Christi Carrasco said they have travelled all over the country because of Dutton’s generosity.  After meeting him, Steve says Christi became excited about the prospect of playing parties for Dutton, and about the potential of travelling to the parties.  “I’ve been doing this a long time,” said Steve, “Don’t get your hopes up, people say a lot of things.” However, Dutton was a man of his word; the Carrasco’s have performed several times and made numerous friends because of him.

One of Dutton’s oldest friends for more than 30 years, Darrell Pratt, Fresno, CA, said, “If you need a real friend, Fred is there.”  He went on to explain that Dutton is one of the most genuine and generous people he knew.  Regarding Fred’s relationships, he explained that instead of Fred being the center of the friendships, “We are the center of Fred’s world. And, as many people who are here tonight, 150, there were still people sending their regrets today.”

Doug Christopher, Danville, CA, believes that “Fred collects people.  He is a relationship guy.  He is a genuine person.  You don’t have to wonder what you’re going to get with him.”

The Texans, a group of four friends from Texas, Frosty and Debbie, and Mindy and Robert, would go to any lengths for Fred.  They feel he is a generous and caring friend and would give the shirt off his back to someone in need.

Valerie Davis, San Jose, CA, opined, “I love this man.  Fred lives large, he should be the mayor of Virginia City.”  She went on to tell me one story after another of his generosity and his excitement about life.

Dutton’s nephew, Erich Haidlen and his wife Kelly, told me tales of his generosity towards their children.  He has bought their sons, Dutton’s great nephews, go-carts, electric cars, among so much stuff that Kelly cannot even describe his big-heartedness.  Erich said, “He’s like a dad to me, I’m like a son to him.”  Among the gifts bestowed to the Haidlen’s is a 1972 Crossle 25 Formula Ford racing car, a relic from the days when Haidlen and Dutton had a racing team together where they won the championship.  Haidlen’s last comment about his uncle, “He has been here for three years already, I can’t believe the man is not the mayor.”

Joline, Colorado, a pharmacy benefits manager who works with Dutton told me, “Fred likes people to have a good time.  Friendships and loyalty are very important to him.”

Dutton’s little brother, Moose, Riverbank, CA (at 6’2” and Fred at 5’8” it was challenging to see “Moose” as the little brother), claims, “My little brother doesn’t go over the top in anything that he does but what he does will set the standard.”  When I appeared perplexed, he went on to explain, “Virginia City will be talking about this party for years to come.”

When speaking about Dutton, a tear came to Nancy Ritchie’s eye; she spoke about his kindness, his generosity, and his willingness to do anything for her.  In a very personal way, he has given something to her and her family that no employer would, many friends would not, and even most family members would never do.  Ritchie is grateful for Dutton’s benevolence.

No matter who I spoke to all weekend long, the theme was the same, Dutton is the most kind, generous, and thoughtful person most have ever met.  He wants others to become friends; not only did he want people to come here to celebrate him, he wanted them to come here to meet each other and to forge new friendships.

Friday night during Carrasco’s performance, Dutton appeared on-stage to thank his guests for attending his party.  “You are exemplary people and I love every one of you,” he then went on to say, “I know you are all here, sitting in your little groups and cliques.  I would like you to take some time to get to break out of your groups and get to know somebody else.  Meet somebody new and get to know somebody else.”

I turned to the woman next to me and said, “I feel like I am at church where they tell you to ‘Shake the hand of the person next to you and introduce yourself.’” She was just thinking the same thing; it was an interesting concept.  He brought his friends together to make friends with each other.

Throughout the weekend, I studied Dutton to see if he was “real”.

Saturday at the Bucket of Blood, he sat with his great-nephews and played with them for at least 20 minutes, entertaining them while he kept an eye on his guests as they mingled.

After dinner Pratt gave a speech about his long-time friend and Dutton came up to give a teary thank you to his guests, “This means nothing if you’re not here.”  Dutton meant every word he said. 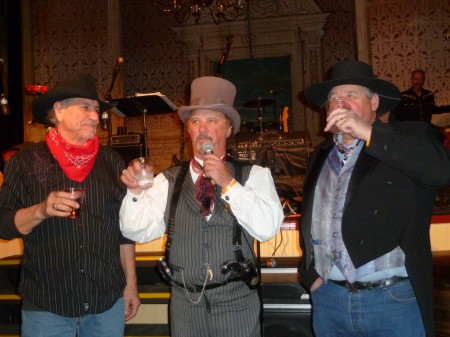 As I watched him throughout the weekend, I noticed he stepped back often, observing people, smiling as he watched his friends mingle and talk to each other.  They traded phone numbers, laughed, talked, and made plans to meet again; Dutton had succeeded.

While Talking with Valerie Davis earlier, she suggested Dutton provide pads of paper and pens so guests could easily exchange contact information with each other; he created an atmosphere where his guests were actively making new friends.  It was like a unique twist of Match.com, only more personable and much more fun.

Even though there were times Dutton had lines of people waiting to talk to him, he appeared happiest when he was watching the new relationships he had a hand in building.

He reminds me of the old 1970s campaign for Coke I’d Like to Teach the World to Sing; “I’d like to buy the world a Coke, and keep it company.”

Virginia City Transformed Back in Time to Honor Fred Dutton added by dawn7 on March 11, 2013
View all posts by dawn7 →