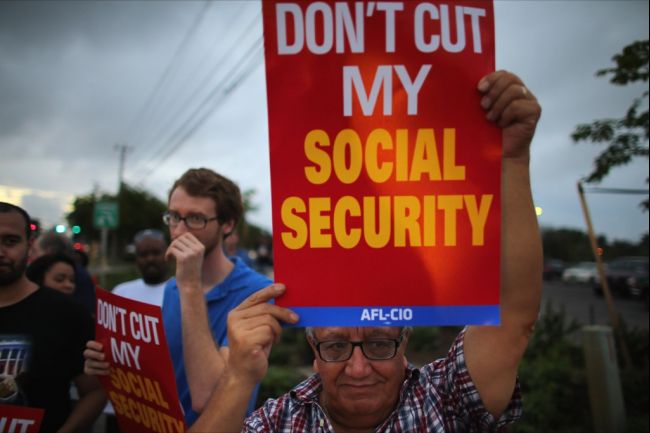 People are living longer in the United States.  We AARP Members are an enormous voting block.  And, we do vote, unlike the other largest group, the 18-30 year olds.

Many of us are on fixed incomes.  We can’t make more money, and we often struggle to pay or mortgages and buy decent food.  Changing social security is unacceptable, period.

Unlike the wealthy, we don’t have the Republican lobby to ensure that we are protected.

Changing the “chained CPI” is unfair to those of us who created a plush life for the wealthy and our government officials.  Most seniors are like me, and put money into social security for 45 or more years, along with our employers.  We deserve to get some of returned to us.  It was intended for us and not some other government program filled with earmarks and waste.

The President calls it a “compromise”.  I say “bullshit”.  I believe in compromise, but this is simply cowtowing to the party of “no”.  Senior benefits should never be on anyone’s table.  It’s unfair, and it’s disrespectful.

I will never be able to vote for the non-existent GOP anymore, and now I’m doubting that I could vote for a democrat.  I strongly supported Mr. Obama in both elections, and now I’m wondering if Nevada’s “none of the above” should have been my choice.

This proposed program would also cut veteran’s benefits.  The families of deceased and severely physically and mentally damaged veterans will suffer.  The government started two wars, they didn’t.

The reality of all of this is that Mr. Obama is ignoring the 99%, and focusing on the 1%.  Most of us don’t really care about how much tax a billionaire pays, it will never be enough.  We do care about our quality of life, and how it has deteriorated over the last 15-20 years.

There is no one to stand up for us.  Not one elected official “has our back”.

There has been a “quiet rumbling” among the working class.  The word “revolution” has been bandied about.  What form it may take is uncertain.

The fast food workers in New York City gave me a thought yesterday.  What if there was a national strike?  What if for just 3 days, no one went to work?  What if for one month no one paid their mortgage to the banks who only exist because of our tax money.  What if no one put gas in their vehicles for one week?  And what would happen if in November 2014 not a single American went to the polls?

Our government would be forced to admit that the 99% do exist.  It will never happen because they have succeeded in polarizing our nation for over 12 years.  The last time we were a united nation was on September 11, 2001.  We won’t fight for our neighbors, we probably don’t even know them.

So, what can we do?  Our votes don’t count.  We elect men and women who serve special interests and themselves.  We could vote out ALL incumbents in both parties, but I doubt voters have the courage to take even this small an act.

Cutting benefits for social security recipients and veterans will protect the waste in Washington.  The Department of Defense will still receive twice what they actually need.  Oil companies and corporate farms will continue to receive their subsidies.  The banks will continue to make record profits thanks to the taxpayers they damaged.