KKK were carrying out a planned rally in Tennessee 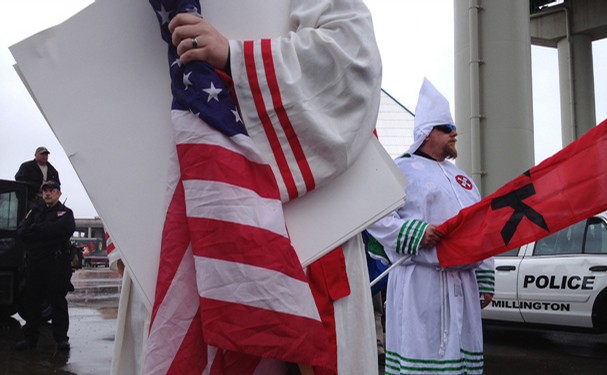 If You Organize a Rally, and Nobody Listens, Does Anyone Hear It?

If there’s a bigger joke in America than the Ku Klux Klan, I would love to hear of it.  An organization whose cruelty and hatred is as much matched by their comedic appearance and ineffective existence must disappear from the 21st century.

Almost like the lyrics of a song, it was a damp and dreary day in Memphis, Tennessee when the KKK were carrying out a planned rally.  Thanks to the well planned effort of the Memphis police the KKK and protestors were separated, and there was no violence.

After a couple of hours of the Klan talking to themselves, they re-boarded their buses and left.  Protestors did the same, and it was as though the event never happened.  It never should have.

Racism is alive and well in the United States.  My best friend lives in Memphis.  It is not by choice.  Years ago he was forced to move there or lose his job.  He remains there now because of family.

The extreme racism of many southern cities and states has created a form of reverse racism.  Memphis is divided by black and white areas.  Caucasians are as mistreated in the black areas as are blacks in the white areas.   Segregationist attitudes are no different than they were in the 1960’s.  The additional effect is a backlash of protectionism on the reverse.

Red states are red because they support the Republican platform of racism and prejudice.  In 2013 they are verbally expressing a change in attitude.  Is it real or merely a smokescreen to attempt a change in the lopsided election tallies?

Either way, today demonstrated the fact that hatred still exists, and ignorance is abundant.

I was in the military, and stationed in the state of Mississippi in the early years of the civil rights movement.  When I returned home to Los Angeles, I told my friends that what they were witnessing on television was far worse in reality.  I told them that I believed our country would be better off if we took a big saw and separated the deep south from the rest of the country, letting it float away into the Atlantic.  Oh, and don’t forget Texas and Arizona who are a part of the “new” south.