Paul, Rubio, and Cruz should be taken behind the woodshed and whipped

Do They Have a Position to Stand on? 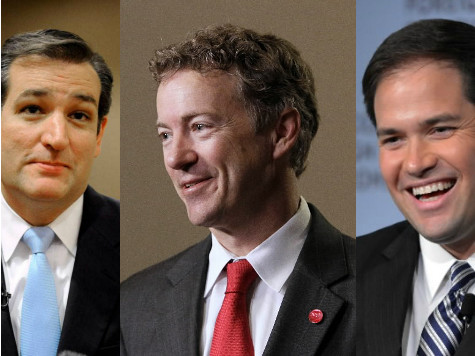 When Politicians Refuse to Debate, do They Have a Position to Stand on?

Almost everyone in the United States is aware that we have two large bodies of men and women whose purpose is to deliberate policy and law.  And they are supposed to consider the effects of their actions related to the people they serve.  One group is called the “Senate”, which is composed of two elected men or women from each state.  The second is called the “House of Representatives”, whose numbers are in relation to state population, it currently has 435 members.

As I said, almost everyone knows about these groups with the exception of the 535 members who are in them.  They don’t talk to anyone, and if things aren’t done their way, the take their ball and go home.

Whatever your opinions may be about the debate on gun control, there must actually be a debate.  But some of the “children” who were elected to the Senate don’t want to talk about it.  They’ll talk, but only in the form of a filibuster.  And now their Republican leader Mitch “the Turtle” McConnell says he will join them.

I think Paul, Rubio, and Cruz should be taken behind the woodshed and whipped.  If the purpose of their position is not deliberation on the Senate floor, then what is it.  Oh, that’s right, they all have an ambition to live in the White House.

If they care for their constituent’s beliefs and desires, they should know that 9 out of 10 Americans are in favor of more extensive background checks.  I don’t care how much money the NRA is giving them, they have to represent the voters once in a while.

After a debilitating loss in November, Republicans talked about changes their party had to make if they were to be competitive in 2014, and 2016.  It appears that they have forgotten about them.

“I disapprove of what you say, but I will defend to the death your right to say it.”  Those words, attributed to Voltaire, (but not originally his), are what a representative form of government means.  Without debate, we don’t know where our government truly stands on the issues.  What are they afraid of?  And, do they know what they’re talking about?  Can we trust a man who will not defend his position on every issue?  I don’t think so.

Nancy Cordes of “CBS This Morning” reported that families of the Newtown massacre are going to Washington today to lobby congress about gun control.  She mentioned that CBS attempted to contact all 14 Senators who said they will filibuster ANY and ALL discussion of gun control.  Not a single one of them would agree to an interview.

Everyone believes that our government is broken, that’s a given.  I believe it’s worse than that, it’s non-existent.  535 men and women are getting salaries, benefits, and kick-backs from lobbyists,that is their only purpose.  They perform virtually no function at all.  So little actual work is performed that their seats in the chambers are not even warm.