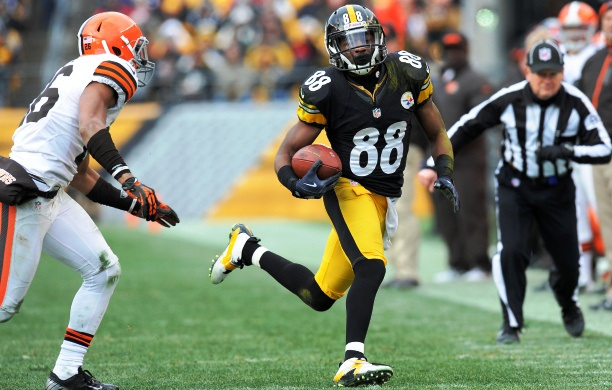 Emmanuel Sanders had limited success with the Pittsburgh Steelers.  The Patriots, who lost their best receiver, and may not have tight end Rob Gronkowski for the start of the season, may be somewhat desperate.

For the Steelers, Sanders lacked the speed of Mike Wallace, and Antonio Brown, and had a tendency to fumble.  The complicated passing scheme of New England may confuse the young receiver.

Brown, like all Pittsburgh receivers, is an excellent blocker.  Used inside by the Steelers, he will most likely work on the outside with the Patriots.

His recognition of coverage and adjustments was considered average by the Steelers.

This appears another step by New England to erase the damage done by allowing Wes Welker to sign with the Denver Broncos.  The majority of the Patriots receiving corps is injury prone.  Gronkowski’s arm problems continue, and another injury may end his career.  He was second behind Welker in 2011 in receptions, and first in touchdowns.  And recently acquired Danny Amendola has seen as much time injured on the bench as playing time on the field.

Brady will be with New England, after restructuring his contract, for several years to come.  Will he have reliable receivers to throw to is the question.  A team that passes to set up the run will miss the consistency of Welker.  His statistics for New England were far superior to every other receiver on the roster throughout his tenure.

I have friends who are New England fans.  They are still angry about the intentional loss of Welker by management.  They criticize the owner, Bob Kraft, for showing so much disrespect for Welker and forcing him to look for another team.

The good news is for the Denver Broncos and quarterback Peyton Manning.  His outside receivers are already excellent, and with the addition of a talented slot receiver, they may have found a path to the Super Bowl.